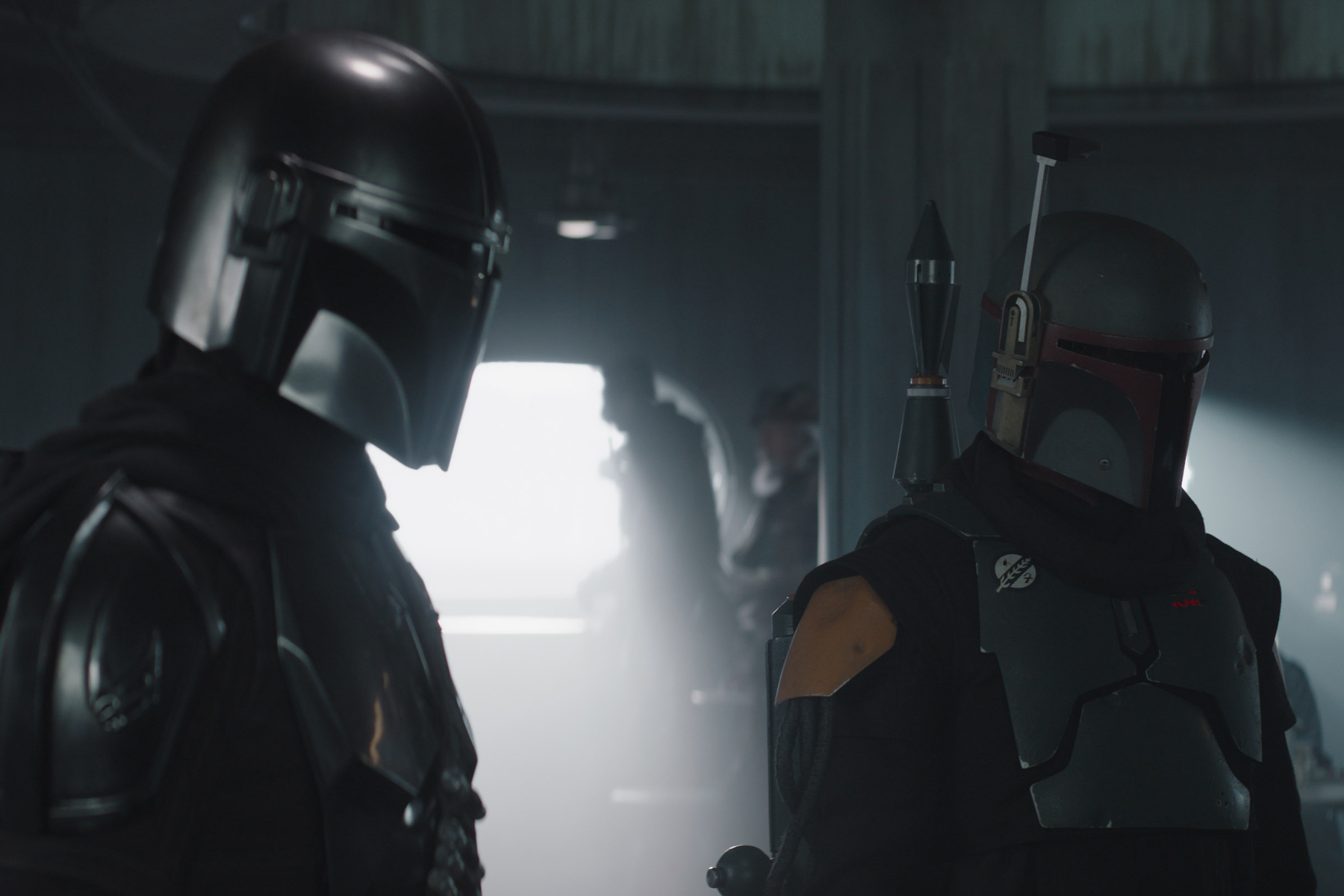 A review of The Mandalorian Season Two finale, “The Rescue,” coming up just as soon as the Quacta calls the Stifling slimy…

The Mandalorian is a show made for children. Or, in some cases, for inner children.

There’s long been an elegant simplicity to how Jon Favreau, Dave Filoni, and company (including Peyton Reed, who returned to direct the finale from Favreau’s script) tell their stories. It’s not just the mission-of-the-week structure that’s otherwise unfortunately gone out of favor with series designed for a more mature audience, but how The Mandalorian boils tired clichés down to their fundamental, impressive essence. Whether it’s little Bobby’s first Kurosawa homage or the 500th time Bobby’s dad has seen a heroic sacrifice, these devices land again and again with the full force of myth. They are meant to kindle the same kind of awe that we all felt the first time we saw the twin suns of Tatooine, or watched the Millennium Falcon leap into hyperspace, or otherwise understood that filmed entertainment is magic that can take us to places we never dreamed possible to go.

And because the Star Wars films have transformed from tales influenced by myths to something mythological themselves, The Mandalorian creative team understands that sometimes, the best way to induce those kinds of chills is to put Mando into the Mos Eisley cantina, or aboard Boba Fett’s ship…

The Best Mandalorian Merch You Can Get Online Right Now

‘The Mandalorian’ Recap: An About-Face

…or to have him meet Luke Skywalker.

When Ahsoka Tano pointed out a few episodes back that there weren’t many Jedi left to train Baby Yoda Grogu, fans’ mental wheels started spinning about who might answer the call from the Seeing Stone. Would it be another Clone Wars character who wasn’t seen dying in Revenge of the Sith? Might the ubiquitous Samuel L. Jackson appear to explain that Mace survived falling out the Windu? Would Favreau be so bold as to have Luke himself appear, and, if so, what actor would be brave/foolhardy enough to step into Mark Hamill’s shoes? (You may recall that things didn’t turn out so well when Alden Ehrenreich did the same for Harrison Ford.)

Instead, Favreau borrowed a page from his colleagues over at the MCU (and, for that matter, from Rogue One recreating Peter Cushing and the young Carrie Fisher), digitally restoring Hamill’s more youthful visage for a few precious, mostly spine-tingling minutes. The effects weren’t quite up to the level of, say, young Tony Stark in Captain America: Civil War, especially whenever Luke was even partially in frame with other characters (including R2-D2!), but the impact of seeing Luke himself step out of the past and into this story couldn’t have been more perfect. Once Ahsoka declined the job so she could go star in her own spinoff, there was no one else who would have been remotely as satisfying, whether to Star Wars obsessives who can name every surviving Jedi on cue or to more casual fans who only know the films. At this moment in the story, Luke Skywalker is 1,000 percent the guy who would answer Grogu’s call, and anyone else would have played out as exactly what they were: a second choice made because of practical considerations concerning Hamill being nearly four decades older than when he was in Return of the Jedi (which was set a few years before the events of this show).

And Luke gets every bit of the hero’s buildup he deserves. We’ve already enjoyed what is practically a full-length Mandalorian episode, with Mando, Cara, Boba, Fennec, Bo-Katan, and Koska infiltrating and conquering the forces aboard Moff Gideon’s light cruiser. All of the action is as crisply shot and exciting as you’d want. Everyone gets a moment to shine — our title character most of all, as he defeats both a Dark Trooper droid and the Darksaber-wielding Moff Gideon, with the Beskar spear coming in extremely handy in both instances. After, there’s tension between Mando and Bo-Katan, who needs to reclaim the Darksaber via combat to regain the Mandalore throne. Giancarlo Esposito makes a meal out of Gideon’s joy at seeing these two thugs realize they may have to fight each other for reasons beyond their control.

But before the representatives of two very different ways of the Mandalore can come to blows, the few dozen Dark Troopers that Mando previously flushed into space come flying back aboard. Mando had only barely survived against just one of them, making the odds look very poor for the rag-tag team occupying the cruiser’s bridge. Which, of course, is when a one-man cavalry flies in on an X-Wing fighter, wearing a brown robe, carrying a green lightsaber, his right hand concealed in a black glove. All of these clues so obviously point to Luke that it almost feels as if the show is setting us up for a fake-out. But it has to be him, right? We only get intermittent glimpses, often via monitors on the bridge, of this Jedi carving his way through the remaining Dark Troopers, which in part was surely due to budgetary concerns as much as a desire to save the reveal until he’s face-to-face with Mando and the kid. And having Grogu essentially watch Luke Skywalker on television only adds to the power of it. Grogu is us, as children, seeing Star Wars for the first time, gasping at the idea of an all-powerful Force that binds the universe and makes everything better. He reaches a tiny hand towards the screen not only because he and Luke are linked by their powers, but because what he’s seeing is, literally, awesome, and he wants to get closer to it — even if it means leaving his father figure behind.

And it’s in that moment of separation, rather than the revelation of Luke’s face, that “The Rescue” is actually at its most powerful. Exciting as it is to have Luke enter the series, even briefly, this is not his story. His story ended, spectacularly well, with The Last Jedi. Here, he is a means to several ends: rescuing the good guys from the Dark Troopers, providing shelter and training for Grogu, and at least temporarily separating Mando from his surrogate son. No, this is the tale of Din Djarin, an orphan rescued by the Watch, raised under their strict laws, who in turn rescued another orphan, and came to care so deeply for him that their bond mattered more to him than the rules that had defined his whole life. As the child reaches out to touch his father figure’s helmet, Mando decides to take it off, not out of necessity like he did in the Season One finale or last week’s episode, but because he wants to. He wants Grogu to see his face, to know who his guardian truly is, and be able to touch his face, even for just a moment. For him, the mission has long since stopped being a job, or even the quest the Armorer assigned him. This is love, and it’s just lovely — lovely enough, I’d argue, to justify whatever handicaps the series had to operate under for these two seasons while Pedro Pascal could act only with his voice(*).

(*) It’s undercut a bit, though, by the choice to have him unmask for the sake of the plot in “The Believer,” and not just because Mando apparently took the time to trim his mustache in between episodes. Potent as the unmasking was, imagine how much more powerful it would have felt had he not already done it under other circumstances in the previous episode.

Leaving aside for a moment the post-credits scene, where Boba and Fennec seize the late Jabba the Hutt’s palace for themselves, Mando and Grogu’s separation leaves things relatively open for the third season. It’s hard to imagine them staying apart for too long, simply given how fundamental the kid’s cuteness is to the series’ appeal, not to mention the apparent limitations on what the show can do with this young Luke. But for the moment, Mando has the Darksaber and doesn’t have a child to protect. He could now join Bo-Katan in the plan to reclaim Mandalore, perhaps agreeing to play figurehead ruler while she actually runs things. He and Bo-Katan could begin fighting instantly. Or, he could just run off to take another bounty-hunting job, or perhaps team up with Cara to track down Grogu’s stolen blood (and/or any test subjects who have been injected with it). For that matter, “The Book of Boba” might not be the name of a Boba/Fennec spinoff, but the subtitle of Season Three, with Mando and Boba going from reluctant allies to enemies. (At the moment, Disney has not clarified to what what the title refers.)

But this was a thrilling and ultimately tear-jerking conclusion to a season that leveled up in pretty much every way from a very satisfying debut year. While Moff Gideon is taunting Mando and Bo-Katan about their inevitable duel, he explains that the story has the real power, not the Darksaber. The Mandalorian is a show that understands just how powerful stories can be. This is the way to the heart of the child inside every one of us who cares even a little about Star Wars.

* As of now, Favreau and Filoni are declining interviews and opting to let the finale speak for itself.

* The post-credits scene raises several questions: Given the expanded size of Bib Fortuna since last we saw him in Return of the Jedi, is there something inherent in Jabba’s throne that makes its occupant put on weight? (And, if so, does Boba need to increase his cardio level?) While running his late boss’s criminal empire, did Bib ever buy a new rancor to occupy the pit below the throne room, or were Fennec and Boba both safe while standing over that grate? And whether or not Boba is starring in a spinoff of Season Three, can we please oh please see him squaring off against Cobb Vanth next year?

* The show again recontextualizes a familiar Star Wars device into something that seems new and scary, in this case zooming in on the launch tube for the TIE fighters so that they seem more intimidating coming out. Meanwhile the stolen Imperial shuttle’s journey through the tube feels far more perilous than when similar shuttles have touched down on the Death Star. (For that matter, the use of extreme close-ups made the already-imposing Dark Troopers seem like even bigger trouble for Mando and his friends.)

* Finally, the fact that Luke Skywalker spoilers so quickly began appearing across social media is a reminder of the complications that come from releasing episodes at midnight Pacific Time. Disney+ is just following the lead of Netflix, which introduced this as the time when most streaming episodes drop, but it’s different for a full-season release and a show that premieres episodes weekly. Then again, the show is available worldwide, so there’s really not a great time to protect people from spoilers. But I wonder what would happen if Disney+ or another streamer tries for, say, a 9 P.M. Eastern release for a season. I am not a crackpot.