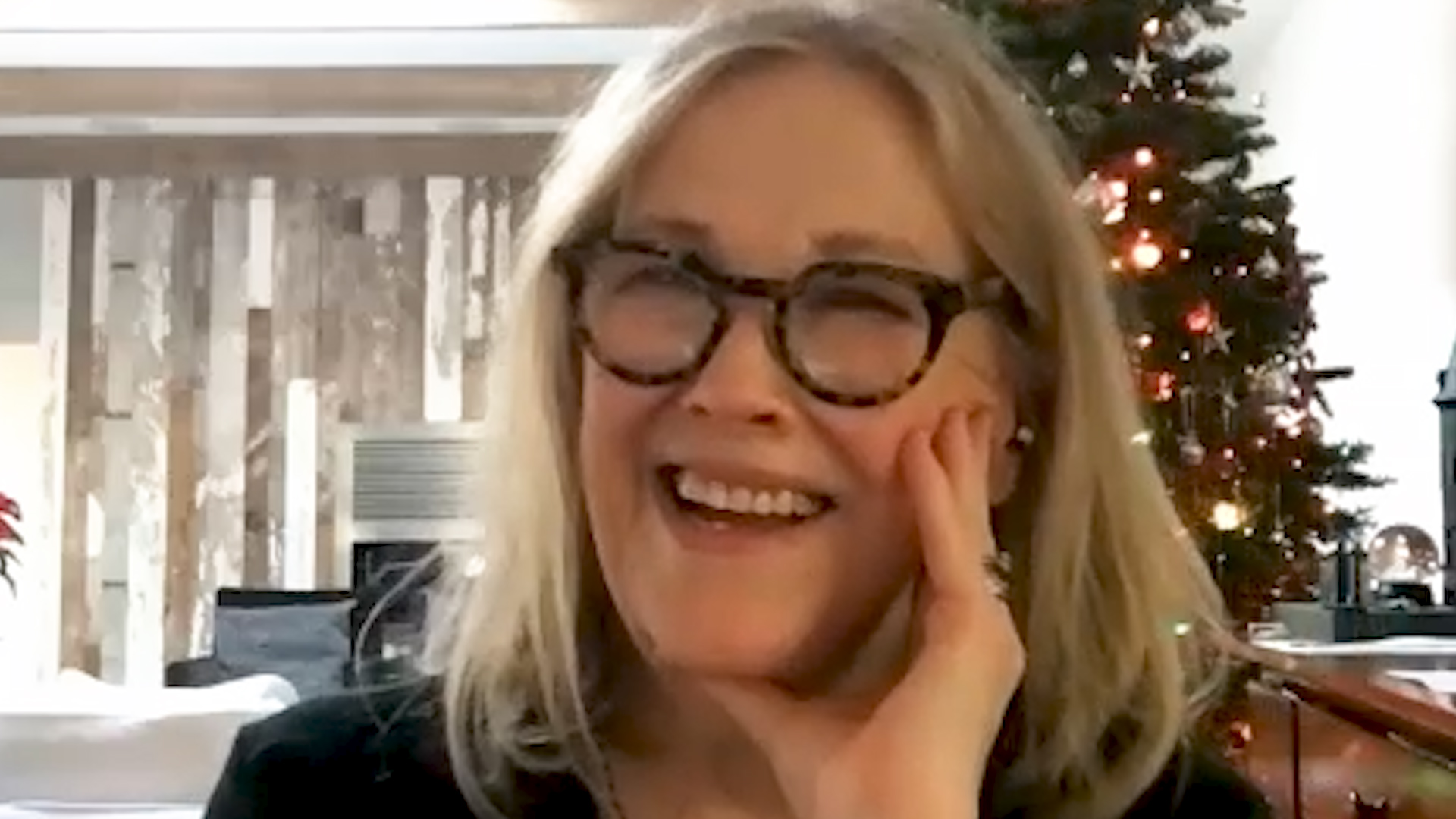 Every generation seems to claim Catherine O’Hara for themselves. While millennials persist with calling her “the mom in Home Alone,” the comedy legend has created unforgettable characters for decades. Now, for those who binged the six seasons of Schitt’s Creek, she’ll forever be the kooky, washed-up soap opera actress Moira Rose, who wears ridiculous wigs and delivers one-liners about the loss of her “Galapagonian tortoise-shell foot bath” in her unplaceable accent while decked out in Givenchy.

In the Seventies, she joined as a member of the Second City improv comedy troupe in Toronto (originally as an understudy for her pal Gilda Radner) and then worked with John Candy, Dan Aykroyd, Martin Short, and others on SCTV. Then, in 1988, a whole new generation “discovered” her when she appeared in Tim Burton’s Beetlejuice as Delia Deetz, performing the unforgettable dinner scene that her lip-synching and gyrating to “Day-o (Banana Boat Song)”. Whether you’re a fan of her hilarious turns in Christopher Guest ensemble rockumentary comedies — Waiting for Guffman (1996), Best in Show (2000), A Mighty Wind (2003), and For Your Consideration (2006) — it’s impossible not to love O’Hara for her humor, generosity, and dedication to her craft.

How to Stream ‘Schitt’s Creek’ Online

For our final RS Interview: Special Edition of 2020, we caught up with the funny woman, while she was at her home in Los Angeles, to discuss her winning an Emmy for Outstanding Lead Actress in a Comedy Series this past September, her memories doing improv over the years, and the enduring legacy she hopes Schitt’s Creek has beyond the pandemic. She told us which of Moira’s wigs and outfits she kept for herself and the best advice Christopher Guest ever gave her (“Don’t try to be funny — just be in character”). Plus, she shares smart advice about getting through our Covid-19 fears: “Assume you have it. … All this talk was about protecting yourself from others… I thought, ‘What a stupid negative way to look at it.’ I’m sorry, it should have been: Assume you have it and don’t give it to anybody. Do everything you can not to make anyone sick.”

On what inspired Moira Rose’s unusual way of speaking.

It was just kind of sort of defensive creativity. It was like: I don’t want to do that; I don’t want to do that; and I don’t want to do that. I thought being an actress and being married to a successful man, you know, there are women I’ve met who not only try to remind you of their life they have outside of being with this wealthy, successful man, but also — not even just actors — who deny where they came from and what they used to sound like — the fact they even had parents at some point, some other city or country, newly created personas and characters. So I thought, ‘Well, that’s great for somebody who’s insecure and wants to prove they have potential and they have talent and then and they learn great big words every day and they put them into vocabulary.’ Pre-Covid, we did a live Schitt’s Creek show, up close and personal, which was so much fun because our audience is just the kindest people in the world. And I would get asked that a lot — about where the voice came from. So I excused it to say Moira and Johnny had traveled all over the world before they lost all their money. And that, being creative — you know, a sponge, for all people and cultures and languages — what you hear when she speaks are [begins to do Moira’s voice] aural mementos of her world travels. And they now are her gift, her gift that she bestows upon people who are less traveled, less educated — an amuse bouche of what life would be like were you to walk in my Givenchys. I’ll come up with a new line, if we ever get back to that show.

On why she’s been lucky collaborating with “really cool people” and not working with, umm, assholes.

Even before Beetlejuice, you know SCTV definitely opened doors for us when we were holed up in Toronto, and then Edmonton, and back Toronto. And we do a season, then we wouldn’t do a season for a few years. We’d lose our deal, then we do another season; it was all over the place. But producers kept us together throughout the years, and because it was sort of so insulated, we felt insulated — just trying to make each other laugh — we weren’t aware of the rest of the world seeing us, but it did open doors for us. So even before Beetlejuice to say: Mike Nichols hired me for Heartburn and Marty Scorsese, he gave me a part in After Hours. And that was crazy. … I really felt I was in way over my head. First day on Heartburn, I thought I was going to hurl all day long,. I’m just looking around: Meryl Streep, Jack Nicholson. “Hi, sorry, sorry, eh?” But I don’t know. When you work with really great, confident people, they just put everyone at ease. When you work with great directors — and I really started out that way. So, again, I’m spoiled: It’s hard to work with a-holes now or insecure people — which usually is what makes people a-holes, I guess. Yeah, when you get to work with really cool people who collaborate and make you feel like you have something to offer… I’m very lucky in that way.

Why Canadians are so funny.

When I was growing up [in Canada], they didn’t have this heavy-duty nationalism, and that’s a good thing because it does make you look outside of yourself and be aware of the world and and not take yourself seriously. And I think that Canadians not only have a sense of humor about others, but also about themselves — which I think is the healthiest and best kind of sense of humor to have. And there’s an edge to it — but with compassion and love — but it’s a good, dark sense of humor, too, in there just because of awareness of the world around you. I was shocked when I first watched the Olympics in America because they rarely showed the other Olympians from other countries. Even if the Americans lost … What about Sweden? They just won!

On the positive, nonjudgmental, almost utopian way queer love is portrayed in the show.

You mean two people just meet, get to know each other, fall for each other, fall in love, want to spend their lives together, get married? Yeah, that should not be that unusual, should it? But unfortunately it is. … A lot of people have written to Daniel and all of us, and tweeted and whatever about how it has made them see people differently: people that didn’t even know they had any bias. And they’re not hateful people at all. … Just to open up people’s eyes and minds and hearts to see that we’re all just people, that we deserve love and we deserve to be respected. … Dan never said to me, I don’t know if he said it to anyone else, but he never said, ‘We’re going to treat people this way on the show.’ We all just sort of knew that’s the way it would be. Eugene and I individually decided, you know, Moira and Johnny were going to be a loving couple that was not going to harp on him about losing all the money ever. Even thought the kids were raised in captivity, captivity of money, we thought we were great parents and we love them and and it was just no question and I was never given some agenda on paper or orally. It was just that was the the vibe — not only in the writing, but on the set. And, you know, Daniel wants to live in this world and so do I. You know, it just makes sense; it’s so stupid to waste time.

On the enduring legacy of Schitt’s Creek.

I think Covid will have a lot to do with it. Who knew that our little comedy — and hopefully they remember the laughs, by the way — because as much as we talk about this and the lovely influence it’s given, it’s been on people or the comfort it’s given people in this crazy year, I also hope they remember laughing because it’s a comedy, which is great. It’s hard to mix both to drama and comedy, and I think they did very well in doing that. I think, yeah, sort of intolerably annoying. Who knew that our story about a family being suddenly holed up together in a small space — adult children and parents — would be the story for so many millions of people this year and that people would be stuck at home and so heavily dependent on entertainment coming into their home. And there we were. But also, I think it’s because people really related to getting to know each other. And if you’re fortunate to have homes and to be with your family, how great is it if you can embrace that and and and be grateful for that time together and learn about each other and see your adult kids as adults — which is hard to do. It’s hard to stop parenting. But, you know, when you let each other grow before your eyes and fall in love with each other, that’s… The Roses set a nice example; I like to think I could do that with my kids.

‘Five Nights at Freddy’s’ – Filming Has Finally Begun on the Blumhouse Horror Movie
Teri Hatcher Isn’t Desperate for a Desperate Housewives Reboot
It’s Just Under 115 Days Til Fast X Finally Hits Theaters, And Ludacris Has Some Thoughts About Filming
Tom Verlaine, Singer and Guitarist of Punk Legends Television, Dead at 73
The Best Street Style from Copenhagen: Oversized Leather, Layering, and Lots of Green