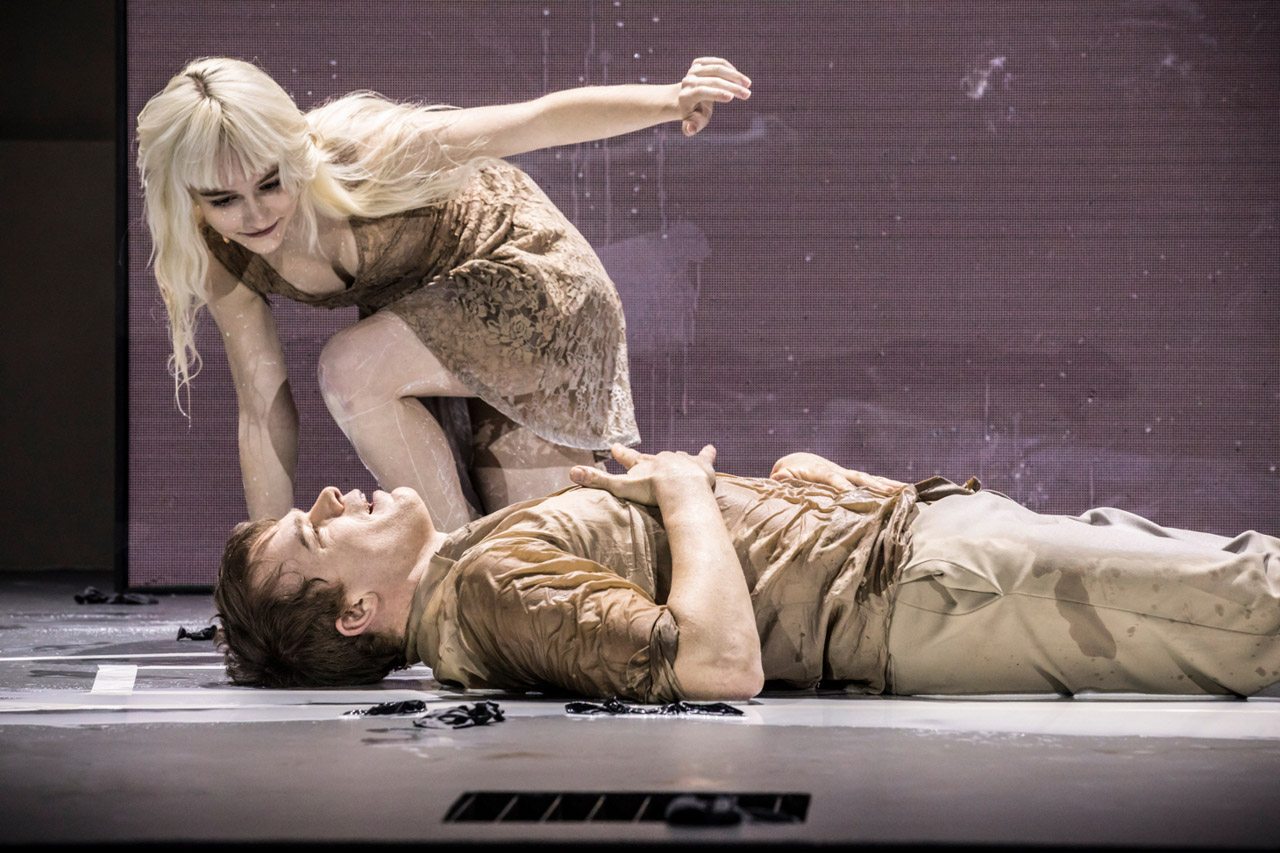 Few artists of any stripe have ever exited this world with the panache of David Bowie, who left us with some of his most fascinating work just before his death on January 10th, 2016. The biggest surprise was his masterpiece of a final album, Blackstar, released just two days before his passing; but there was also Lazarus, the remarkable off-Broadway play that opened a month earlier. The show picks up the story of Thomas Newton, the alien Bowie played in The Man Who Fell to Earth, 30 years later, while mixing old and new songs from Bowie’s catalog. With a filmed performance from the show’s London run livestreaming this weekend to commemorate the anniversary of Bowie’s death (see Dice.fm for streaming times and ticket information), here’s our full 2016 interview with that show’s director, Ivo van Hove, for the first time.

Bowie had talked about doing musical theater for quite some time. What was your sense of why now, and why this particular story?
I don’t know why. But when we did the workshop in New York in April of 2014, afterward, he said, “This is my dream.” I don’t think he ever used the word “musical.” He said “music theater.” And it feels like that for me, also. It feels like “music theater.”

In some weird way, you could on some level call this a “jukebox musical,” because it has some of his most famous songs, but it’s obviously a universe away from, say, Mamma Mia!.
[Laughs.] I think he’s turning around in his grave, now, if he hears that. The first meeting we had, he said, “The one thing I don’t want is a ‘jukebox musical,’ with one pretty song after the other one.” He says, “I really want to tell a story. There really has to be a story there.” And a story it is.

One of the things that was so stunning to me was how dramatically recontextualized the old songs were, and how well they worked in the context of this story — as if he had had it all in mind, 40 years ago.
It’s great that you say that, because it’s  a beautiful and daring combination of new songs and existing, iconic songs:  “Life On Mars?,” “All the Young Dudes,” you know. [Book writer] Enda [Walsh], together with David, of course, made the song choices, then decided which song would fit in with what character best. I think they did a beautiful job at doing that.

There’s a playfulness in certain things — the reclusiveness of the Thomas Newton character plays off, one could say, the perceived reclusiveness of Bowie during the 10-year period where he wasn’t performing or recording. How conscious do you think he was of playing with these ideas?
I think that on the whole, it was a great job making a story that has nothing to do with David, and everything to do with him at the same time. That was quite amazing to me, how deep that was. Once we knew that he was really ill, and you hear a line like, “I’m a dying man who can’t die,” a line that was already there …  David didn’t even know that he was sick at that moment, so Enda for sure didn’t know, you know? That line was already there.

I felt with David, from day one, a huge urgency to do [this show]. I wanted to postpone it because of calendar issues. And  he said, “No, no, we have to make it now, it has to happen.” By then he was aware that he was already ill. So there was an urgency in him to get this onto a stage. And that’s what I really admired so much, that the man, at that moment of 68, had such a fire within himself, such a fire and an ambition — I mean, a real artistic ambition, to make something happen. Because he believed, really, that it was something important.

The song “Lazarus” is on Blackstar, but it was written specifically for the show, right?
One of the first remarks I had is like, “We need to have a song that establishes the whole character of Newton, in totality, immediately, somewhere in the beginning of the production.” And then he wrote this song, which was called something different, originally. I don’t know what it was. But he pretty quickly said, “I want to rename it into the title of the production.” Then he literally said, you know, “I’m going to put it on my album, my new album.”

I thought that “Changes” was just stunning. I never would have imagined it with that kind of emotional tone. It completely transformed the song.
After he saw it the first time, David said afterward, “I’m so glad I wrote this song.” [Laughs.] I think it fits perfectly in the show, and Cristin Milioti is giving a very personal interpretation of it. It’s heartbreaking.

You had the burden of knowing that he was ill, which, I imagine, put even greater importance on this collaboration and this show.
Yeah, but the burden was on him, not on me, you know? For me, keeping it a secret was not at all any problem. It was the most normal thing to do.

Bowie was the hero of my youth, and my adolescence, and my adulthood. Now I got to work with him, and he became … I knew very well that he wasn’t looking for a groupie or a friend, but for an artistic collaborator. And he was so open toward collaboration — that was amazing.  It never felt like a threat, when you were together with him in a room. He was always listening very carefully. He was giving very specific, great remarks. Always short, because he was not a man of many words, but the words that he said were always very sharp.

At a certain moment I said to him, “The music is just too loud, too many times,” and he replied, “Dialogue has to be king.” It was just one line, but so great. So he supported the whole thing, and gave everybody who was part of it a lot of freedom.

What did you learn about him from your proximity during that time?
He was a real family man. He loved to go home, to be at home with his daughter, with his wife, with his family. He was very secretive. But he also loved music. He really lived, also, through his music.

I discovered that in a very deep way, and I’m much more aware of it now than I ever was, that his music is a very personal expression of what he felt, what he was afraid of, what he was longing for, and, even more, his observations about the world. A lot of his songs are about our society: “All the Young Dudes,” “Life On Mars?,” “This Is Not America.” I could go on. But also, as in the case of “The Man Who Sold the World,” very personal, with a personal worry, a personal fear behind it. His work, like a real artist, is an expression of what he felt. It’s not about making a hit. He made hits, but that’s not what his prime drive was, in his mind.

I know he was not feeling well on opening night, but what did he have to say that evening?
Well, we were sitting behind the stage together for quite a long time, 15, 20 minutes. And he was excited. He was really excited. It was his dream coming true. And he was dreaming of the next [play]. He said, “Let’s go for the second one.” He really loved what he had seen.

The real ending of the show, when the rocket launches, was an idea I had only a few days before opening night. Before that, it didn’t launch. And I said, “Well, David, look at that,” and then he said, “Oh, so beautiful.” He really enjoyed the production a lot, I can say.

What were the auditions for the actors like?
That was a defining moment, because we were both there. Actors would do two songs, and then also a scene. And they always looked to my side — “What does the boss think?” [Laughs.] And then we always agreed. When Sophia Anne Caruso came in [to audition for the part of a teenage guardian angel], we didn’t need half a song, you know, to look at each other and say yes. It was like, boom. I’m a quick decider. But he made it quicker. We did the whole cast, the whole auditions, within three or four days. It was done.

What do you think Sophia’s character symbolizes?
Well, Lazarus in the Bible is resurrected by Jesus. In this case, the little girl is doing the job of Jesus. She resurrects Thomas, but she is, of course, imaginary, an invention of his mind.

Since David has a daughter around her age, it’s hard not to connect the two.
Of course, it’s not coincidence. His daughter is now 15, and when we wrote it she was 13. And Sophia was 13 [when she was cast]. That was one of his conditions for the show, that he wanted a girl in it, in an important role.

Bowie didn’t create the character of Thomas Newton,  but he did embody him, and the character stayed in his mind for decades. Did you get a sense of what that attachment was?
When I had to go to the first meeting with him, during the flight I watched The Man Who Fell to Earth again. And it struck me that his performance is a performance of today, it’s very modern acting. A good actor always plays himself. When you play Macbeth, you have to discover the Macbeth in yourself.

He really discovered the Newton in himself, and he connected to that character, totally. And it’s not so strange, when you listen to his music. There’s a lot of music about people that are feeling not at home, displaced, on earth.

So it’s not so strange that this character was a very personal one to him. And it’s not strange that he came up with this idea of making him the central character of this project, I think. Because it brings up an existential crisis, and I mean that in a real sense of the word — a crisis about, “Why are we here? What does it mean? What does this all mean? Is it meaningful? Does love make it meaningful, or does love make it even harder, sometimes?”

And at the same time, we crave love. That’s the beautiful monologue at the end of the production, when Michael C. Hall is is talking about this family, that he’s craving to be with his family again, even when he knows that they’re dead, they’re not there anymore. He’s craving this togetherness. And I think that’s deeply David Bowie.

After such a wild life, it’s interesting to come back to that simple yearning for family.
That’s what the song “Lazarus” is about. You know, people on the show asked, “Oh, why isn’t he at the party?” I said to them, “I think David Bowie has seen all the parties that are available on Earth. He doesn’t need another one.”

50 Top-Rated Amazon Gifts for Women With Thousands of 5-Star Reviews
Toy Story Fans Think The Movie Dropped An F-Bomb Thanks To Viral TikTok
Francis Legge Guests On “If These Walls Could Talk” With Hosts Wendy Stuart and Tym Moss Wednesday, November 30th, 2022
James Cameron Claps Back At Unfavorable Marvel And Avatar Comparison
New Trailer for ‘Marvel’s Midnight Suns’ Looks at the Combat [Trailer]