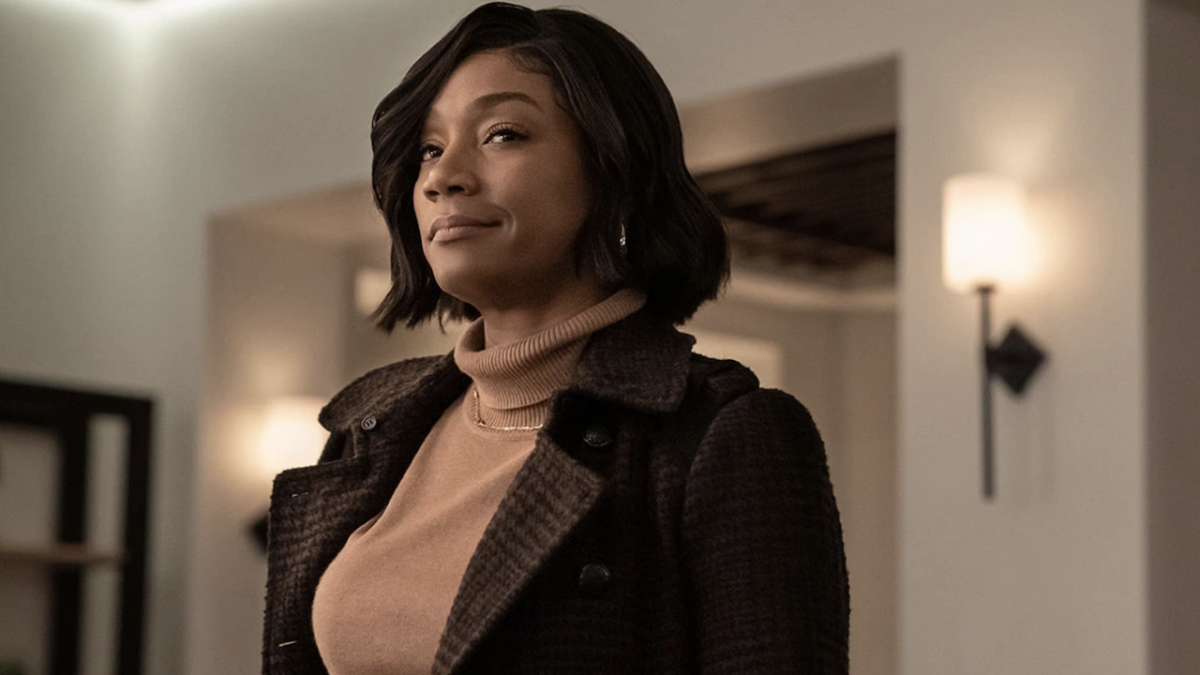 Tiffany Haddish started her career by making audiences laugh as stand-up comic before starring in the critically-acclaimed comedy Girls Trip. She’s been doing more varied work in recent years, though her newest film is Cory Finley’s Landscape with Invisible Hand, which is based on M.T. Anderson’s science-fiction novel of the same name. When it had its premiere at this year’s Sundance Film Festival, an audience member shared a gripe about the new movie, and Haddish had something to say.

The annual Sundance Film Festival serves as a showcase for various big-screen productions (most of which are indie movies) and, this year, Tiffany Haddish’s latest is definitely one of the most unique. In the upcoming Landscape with Invisible Hand, Earth is taken over by aliens called the Vuvv, who bring wonderful technology to the planet that only the rich can afford. This causes two teenagers to live stream their love story to the fascinated aliens in the hope of receiving financial compensation for it. Apparently, one festival attendee took issue with the flick because it’s produced by a major studio, and the moment was caught on video by Deadline Hollywood. Ultimately, Tiffany Haddish stood her ground, though, and sought to defend it. Take a look at the video below:

Tiffany Haddish defends the presence of her #Sundance-premiering film “Landscape with Invisible Hand” after an audience member called out the filmmakers and festival programmer for showcasing a studio-backed film at an independent film festival pic.twitter.com/KKnVRPzT5wJanuary 24, 2023

In the video, an audience member directed his question towards Landscape with Invisible Hands‘ producers and the Sundance programming team. He asked if they found it ironic that a movie about exploited young artists has studio financing and is holding its world premiere at Sundance. While the query may not have been directed at Tiffany Haddish, the 43-year-old comedian dropped some honest thoughts:

Her answer was met with thunderous applause. Her comments seem to suggest that if the folks involved didn’t have a problem with the message the movie presented, then others may not want to take issue. What’s unique about the indie world is that it that festivals like these are crucial for allowing small films and even lesser-known creatives to get their names out into the open. This isn’t Cory Finley’s first time at Sundance, as he presented his directorial debut — the black comedy thriller Thoroughbreds — which underwent great changes during its development. On a side note, he also helped bring out Hugh Jackman’s funny side in HBO’s Bad Education, which won Outstanding Television Movie at the 2020 Emmy Awards, with Jackman being nominated for Outstanding Lead Actor in a Limited Series or Movie the same year.

As for what’s next for Tiffany Haddish, we’re happy to know that a sequel to Girls Trip is finally happening! Considering what a riot the previous film was, it’ll be amazing to see her reunite with Queen Latifah, Jada Pinkett Smith, and Regina Hall for outlandish mishaps and heartwarming moments. More immediately though, Haddish will also star in Disney’s Haunted Mansion reboot alongside Lakeith Stanfield, Owen Wilson and more. It’s great that she’s sticking to her comedy roots, but it’s also wonderful to see her doing new kinds of projects and being so passionate about them.

Be sure to keep an eye on CinemaBlend’s schedule of 2023 new movie releases to so you’ll know when Landscape with Invisible Hand gets a wider release.

Connie Britton Weighs in on a White Lotus Season 3 Return
Hailey Bieber Says It’s Time to Make the Hair Change You’ve Been Considering
The White Lotus’ Michael Imperioli Gives Tour of His NYC Home
Louis Vuitton’s New Watch Is Out of This World + More Fashion News
Fani Willis Was a Lawyer for a YSL Co-Founder. He Says She’s Not Who She Seems