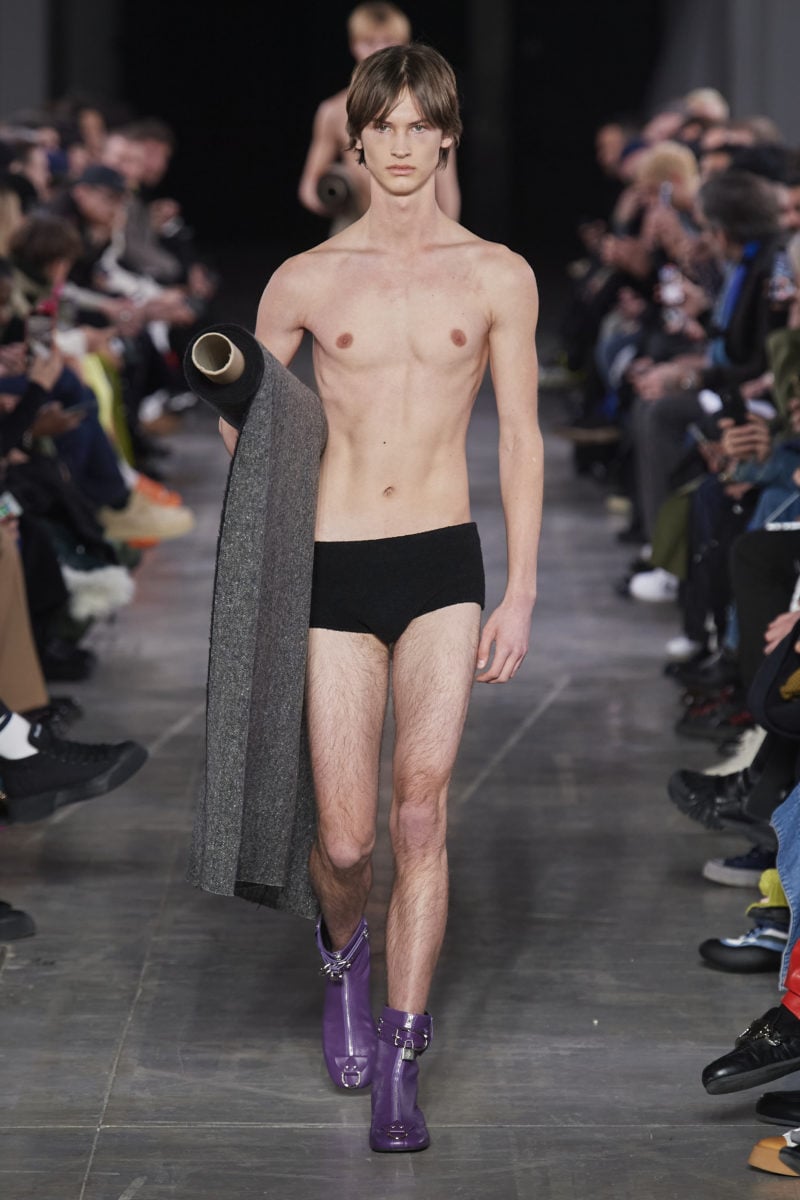 They certainly weren’t at the Fall 2023 menswear shows.

The first microtrend of 2023 is here, and my god, is it a doozy. You ready? Fabio-core. What, pray tell, is Fabio-core? It’s exactly as dramatic and diverting as it sounds. Think long luscious hair, tight pants and open, billowy shirts that appear to come with a built-in wind machine.

Don’t believe us? Look at the Fall 2023 menswear runways. At Dolce & Gabbana, men forgot their shirts, but they didn’t forget their fur-covered almost floor-length coats. Similarly, at Gucci business-like blazers were paired with necklines that went down to belly buttons. Fendi opted for less midriff and more male shoulders as models walked in shirts sans one sleeve. And at JW Anderson, they simply sent men out in stylish underwear. Skin is officially in! But while we’re all here for giving men more space to experiment with their clothing, the fashion wasn’t the problem — the lack of representation was. There were no plus-size male models on the runways.

Now, it’s long been known that the fashion industry has a diversity problem — whether that’s with size, race, sexuality, disabled people or otherwise. But the dialogue around these discussions is almost always centred around womenswear. A possible explanation for this is the modelling sphere has been historically dominated by women. Do you think anyone outside the fashion industry could name a male model aside from Zoolander? Probably not (and he’s fictional). In fact, male modelling didn’t really become fully formed until the late 1970s and ’80s when the now-disgraced fashion photographer Bruce Weber made headlines for his sensual photos of polo player Jeff Aquilon and Jean Paul Gaultier’s muse Tanel Bedrossiantz introduced a new androgynous style to the catwalk.

Since then, the “It” look for male models has had a few ebbs and flows — buff and bronzed, heroin chic, boyish charm, athletic build, and gender-bending looks have all been en vogue — but the overarching beauty standard has remained the same: thin is in. What’s surprising is that men were virtually excluded from the body positivity moment that began in the 2010s. When Ashley Graham and Tess Holiday were making strides and fighting for better representation of women’s bodies, men were seemingly left in the 2000s, or worse, pressured to look more like superheroes as Marvel movies began dominating the box office.

“I think it comes down to our concept of masculinity and the preconceived ideas we have about what the modern man should look like,” shares Mahrzad Lari, co-founder of Wide the Brand, the Canadian extended-size menswear label and model for Folio Montreal. “As a society, we tend to think that men all want and have to be strong, powerful, confident beings. Acknowledging that there is a need for body acceptance for all bodies also means being vulnerable enough to allow the movement to uplift us, no matter our gender.”

And as Sean Loughran wrote for FASHION’s October issue, we don’t talk nearly enough about how the lack of plus-size male models affects men’s health. He notes that when he went to a doctor to treat his teenage anorexia, Loughran was told that “boys don’t get eating disorders.” His condition only worsened, and he was hospitalized. Today, it’s estimated that one in three people experiencing an eating disorder in the United States is male, according to the National Eating Disorders Association.

So the question remains: where are all the extended-size male models? Lari shares via email that he’s seeing slow progress, especially in the film industry. “When we look at actors such as Jonah Hill and Brendan Fraser shifting from secondary roles to leading men, we see that society is starting to understand that being a hero has nothing to do with one’s size.” We’re also starting to see a handful of modelling agencies like IMG create a plus-size male models division. And on the runway, Rihanna’s Savage x Fenty line and British designer Steven Stokey-Daley have spotlighted several size-diverse models.

The needle just has to keep moving forward, and showing Fabio-inspired clothing on exclusively thin men isn’t the way to do it. “Masculinity is so much more than the number on a scale,” says Lari. “We all deserve to look and feel good.”

Marilyn Manson, Esme Bianco Settle Sexual Assault Lawsuit
Emma Roberts Explains Why She Was Excited To Work With Her Aunt Julia Roberts’ Longtime Co-Star Richard Gere
‘Talk to Me’ – A24 in Final Talks to Acquire Sundance Horror Movie
How The Last of Us Made Its Zombie Fungus So Much More Real (and Terrifying)
Could Scooby-Doo 3 Still Happen? Here’s What Sarah Michelle Gellar Thinks