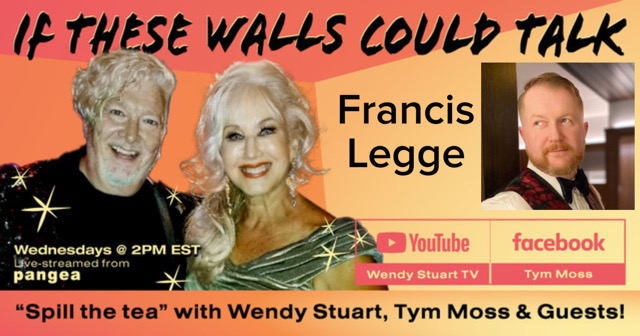 Who else but hosts Wendy Stuart and Tym Moss could “spill the tea” on their weekly show “If These Walls Could Talk” live from Pangea Restaurant on the Lower Eastside of NYC, with their unique style of honest, and emotional interviews, sharing the fascinating backstory of celebrities, entertainers, recording artists, writers and artists and bringing their audience along for a fantastic ride.

Francis Legge will be a featured guest on “If These Walls Could Talk” with hosts Wendy Stuart and Tym Moss on Wednesday, November 30th, 2022 at 2 PM ET live from the infamous Pangea Restaurant.

Wendy Stuart is an author, celebrity interviewer, model, filmmaker and along with If These Walls Could Talk she hosts TriVersity Talk, a weekly web series with featured guests discussing their lives, activism and pressing issues in the LGBTQ Community.

Tym Moss is a popular NYC singer, actor, and radio/tv host who recently starred in the hit indie film “JUNK” to critical acclaim.

Francis Legge is already rockstar legend in the food world and beyond. With the debut of Snack Vs Chef on Netflix Nov 30th you’ll get to meet him again in case you missed him on Masterchef Chopped, beating Food God Bobby Flay….And then there is the uber successful   Shortbread Society, on Instagram with more mouthwatering flavors of Shortbread than you could ever imagine, created with his fabulous wife (behind every great chef there is an equally great woman).  Coming to NY in 2001 this native of Scotland worked for Next Magazine as a photographer with a column “Out and About”. And then there were the music videos with Amanda Lepore and Cazwell, with “All Over Your Face”going viral and launching him into a major music video career.  The documentary “Godfather of Disco” was next, and somewhere along the way he launched two Donut Shops!

Watch Francis Legge on “If These Walls Could Talk” with hosts Wendy Stuart and Tym Moss on YouTube here:

Subscribe and listen to “If These Walls Could Talk” on Apple Podcasts/iTunes here: