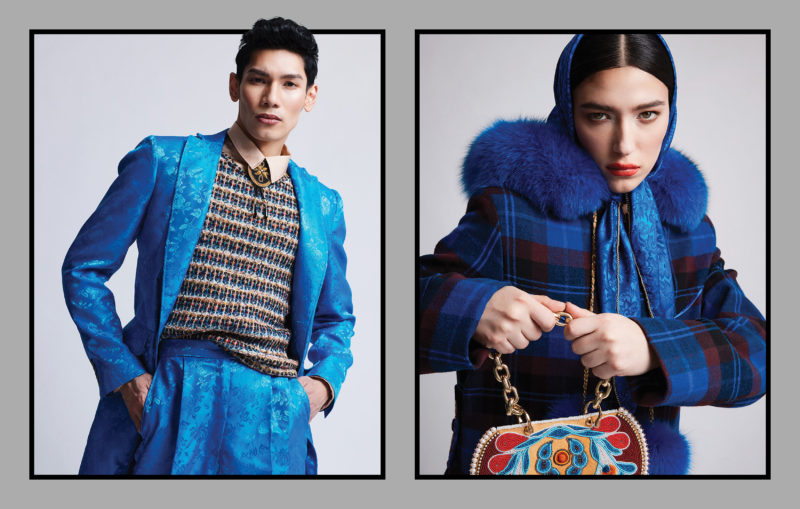 In honour of the Santa Fe Indian Market’s 100th anniversary, discover some of the event’s top fashion talents.

One hundred years of fashion can feel like a long time, with styles evolving and, more often than not, returning. (We see you, low-rise jeans.) But for the designers who took part in the 100th edition of the Santa Fe Indian Market in New Mexico, clothing is about so much more than trends.

“Fashion today is just a continuation of who we are as a people and how we’ve always expressed ourselves,” says Lauren Good Day, one of 15 designers from Canada and the United States who staged runway shows at the world’s largest Native American art market in August. Styles varied from those with traditional Haida images, like in Dorothy Grant’s work, to menswear by Orlando Dugi that was inspired by the creation story in Diné culture. Celebrity models added to the festive atmosphere and included Prey’s Amber Midthunder, Dark Winds cast members Kiowa Gordon, Jessica Matten and Eugene Brave Rock and fashion model Quannah Chasinghorse.

“Indigenous fashion is created with so much care and intention,” explains Jason Baerg, who designs under the label Ayimach_Horizons. “We look through the canons, and there’s a super-rich visual archive from every nation that speaks to our great pride and connection to place, story and ancestors.”

Designer Melanie LeBlanc says that everything contemporary designers are doing has roots in what has come before. “With fashion evolving over the years, even though it might not be exactly how it was when our ancestors made clothing, we’re still bringing aspects of their beading and their silhouettes into today’s fashion,” she says. “We’re just twisting it into a way in which people of our generation will wear it.”

Here, we spotlight some of the brands that took part in the 100th Santa Fe Indian Market.

Design ethos: A recent graduate of Saskatoon’s Academy of Fashion Design, LeBlanc is focused on slow fashion. She aims to honour her Dene heritage, through colour and fabric (like lining the hood of a coat with electric-blue fox fur), and also her grandmothers (both adopted and biological), through her quilting and patterns.

Blackburn’s practice includes jewellery and commercial and conceptual art, but the common elements in her work are adornment and techniques specific to the Dene people of northern Saskatchewan.

Background: Based in Montreal, Skawennati is a cutting-edge visual artist from the Kahnawà:ke Mohawk Territory who has been making movies out of virtual worlds for years. She also creates textiles, still images and sculptures with a focus on Indigenous futurism, depicting Indigenous people thriving and revitalizing their languages.

Design ethos: The artist first created her looks — camouflage ribbon shirts and calico pants — on avatars and then brought them to life. She arrived at the designs after some introspection: “What’s the future of calico and of the ribbon shirt? At what point can it change? It’s the same question for us. What can we leave behind in the past? And what should we take with us?”

Background: Designer Korina Emmerich, based in Brooklyn, N.Y., brings vibrant colour and design to everything from berets to vests. Originally from the Pacific Northwest — and a non-enrolled member of the Puyallup Tribe — she often uses Pendleton fabrics in her designs, and while the textile company isn’t an Indigenous-owned brand, its blankets have been embraced by many Indigenous people.

Design ethos: Emmerich works with fibres (including wool and linen) from her homeland and incorporates social and climate justice wherever possible, using runways as a form of protest. In Santa Fe, she showed a dress fashioned from a red banner about missing and murdered Indigenous people that she made in collaboration with RISE.

Background: From Prince Albert, Sask., Toronto-based Jason Baerg is an interdisciplinary artist, a curator and an OCAD University faculty member who brings his northern Saskatchewan Cree Métis heritage into everything he does.

Design ethos: Baerg’s artistic pieces incorporate movement and bold colour and transcend stereotypes like gender dualities. “As a Two-Spirit person, I welcome my teachings and try to filter them in an abstracted way so it’s safe for my community to share them,” he says.

Background: An artist and fashion designer, Lauren Good Day is Arikara, Hidatsa, Blackfeet and Plains Cree. She lives and works in North Dakota, although she has spent time with family on the Sweet Grass Cree First Nation in Saskatchewan.

Design ethos: Family and a longtime devotion to art and fashion are the threads running through Good Day’s work. Each of her collections is inspired by her children, and sometimes relatives appear on her runways — her daughter jingle-dress danced at the opening of her fashion show at the Santa Fe Indian Market.

Reba McEntire Will Perform Live at Her Restaurant Opening
Caroline Jones, Alyssa Bonagura Team Up For ‘Keep It Safe’
Wynonna Judd Doesn’t Think The Judds Final Tour Will Extend Again
Emilia Clarke’s The Pod Generation Is A Clever Sci-Fi Satire About The Future Of Pregnancy
Tiffany Haddish Stood Her Ground At Sundance After An Audience Member Griped About Her New Film