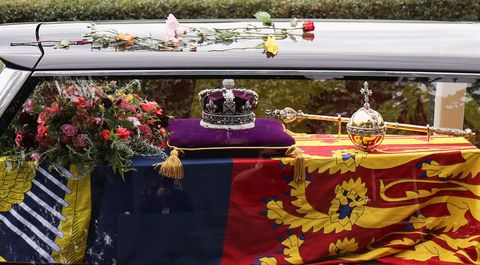 Queen Elizabeth II’s coffin makes its final journey today during its ceremonial procession from Westminster Hall, where the Queen laid in state the past couple of days, to her final resting spot at Windsor Castle.

During the funeral procession and the Queen’s period lying in state in the days preceding the ceremony, the Sovereign’s crown, orb, and sceptre were placed on top of coffin—objects with deep history and meaning to her reign and the royal family’s history. So, why were they there? And what happens to them after? 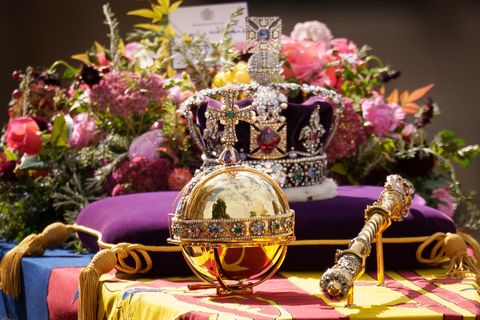 What is the significance of the Sovereign’s crown, orb, and sceptre?

The three items are part of the Crown Jewel collection, according to Historic Royal Palaces, which protects the pieces in the Tower of London. They were used in the Queen’s coronation ceremony in 1953. They are not unique to Queen Elizabeth II’s reign; the orb and sceptre were actually created in 1661 and have been used in every coronation for the British royal family since King Charles II’s coronation that year (yes, 1661, so these are centuries-old pieces). 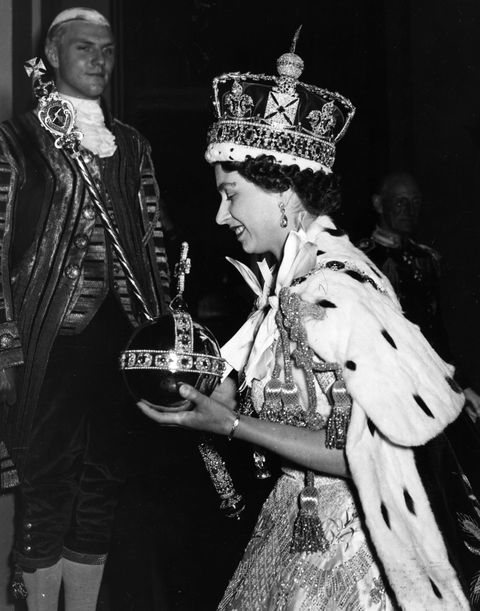 The Queen wearing the Imperial State Crown and carrying the orb and sceptre during her coronation in 1953.

The crown on the coffin, as Town & Country pointed out, is the Imperial State Crown, which is “made of gold and set with 2,868 diamonds, 17 sapphires, 11 emeralds, 269 pearls, and 4 rubies,” Historic Royal Palaces wrote on its site. The crown was made for Elizabeth’s father King George VI during his 1937 coronation. It is worn by the monarch after they leave Westminster Abbey following their coronation; the St. Edward’s Crown, made in 1661, is used only for the sovereign’s crowning moment.

The sceptre on the coffin, originally made in 1661, is adorned with one of the world’s most valuable diamonds. Elizabeth’s grandfather had it modified in 1910 so it would contain the Cullinan I diamond, which was discovered in South Africa in 1905. That jewel is the 530.2 carats, “the largest colourless cut diamond in the world,” Historic Royal Palaces shared.

The gold orb on the coffin, adorned with a cross, was also used during the coronation and symbolizes to the monarch that “their power is derived from God,” per Historic Royal Palaces.

What happens to the pieces after the funeral?

They won’t stay with Queen Elizabeth II after the funeral or her burial. According to The Telegraph, they will be removed “in the final moments before the public sees its last images of the monarch’s coffin” during her service in St. George’s Chapel. Before the final hymn is sung during the private service (the state funeral was at Westminster Abbey earlier), crown jeweler Mark Appleby will remove the pieces from the Queen’s coffin and give them to the Dean of Windsor. The Dean will then place them on a high altar.

The objects will be used again soon though, assuming the royal family follows tradition and uses them in King Charles III’s coronation. The date for that has not been set yet.

The Queen will be laid to rest in St. George’s Chapel’s King George VI Memorial Chapel with her parents and husband Prince Philip, who will be moved from his original resting spot of the Royal Vault.

The three objects adorning coffin pay tribute to her reign as Britain’s longest ruling monarch. Elizabeth ruled the country for over 70 years, from Feb. 6, 1952 to Sept. 8, 2022.

Alyssa Bailey is the senior news and strategy editor at ELLE.com, where she oversees coverage of celebrities and royals (particularly Meghan Markle and Kate Middleton). She previously held positions at InStyle and Cosmopolitan. When she’s not working, she loves running around Central Park, making people take #ootd pics of her, and exploring New York City.