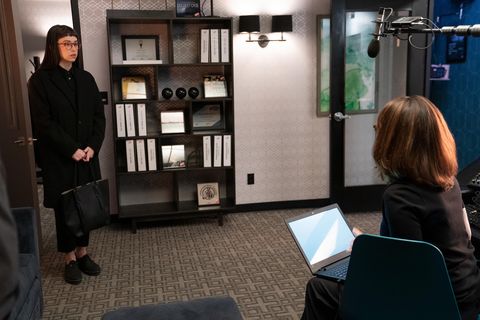 The second season finale of Only Murders in the Building takes us back to the beginning—not of the season, but of the entire series. To wrap up the mystery of Bunny Folger’s death, we have to go all the way back to All Is Not OK in Oklahoma, the Cinda Canning (Tina Fey) podcast that first brought Mabel (Selena Gomez), Charles (Steve Martin), and Oliver (Martin Short) together. You see, the subject of that podcast, the missing Chickasha, Oklahoma woman Becky Butler, is actually not missing at all; she’s Poppy White (Adina Verson), Cinda’s mousy assistant, as we learned in the previous episode. In the season 2 finale, we find out how she got here.

Becky’s life back in Chickasha wasn’t great. She lived with her dad, who didn’t appreciate her, and worked for the creepy mayor, who sexually harassed her at the office. She found some solace in listening to Cinda Canning’s podcasts, but she was ready to start anew. With the help of a DIY makeover and a quick Google search, Becky fakes her own disappearance and seeks out Cinda for a job. Now working under the alias Poppy White, she pitches Cinda a new podcast idea: a girl named Becky Butler’s disappearance in a small Oklahoma town. Cinda bites, unaware that Poppy is Becky herself.

Sure enough, it takes off. All Is Not OK in Oklahoma is a success, but Cinda is already anxious about her next pod. She doesn’t want to be a one-hit wonder; she will not be “podcast Nickelback” God forbid. (Come on, Cinda, they had at least three hits.) Plus, these Only Murders in the Building newbies are threatening to steal her thunder with their amateur charm. Poppy suggests a podcast on the missing artist Rose Cooper (you know, the painter who made that erotic portrait of Charles’ father and who posed as Bunny’s mother in past episodes?) Cinda scoffs. Art? She wants something juicier than that. “I need murder!” And she’s tired of waiting for one to fall into her lap.

Cut to present day, Mabel, Charles, Oliver—who know that Poppy is Becky—believe Cinda orchestrated Bunny’s murder in her desperation for a meaty new podcast subject. Now they just need her to confess. They meet Poppy and her lovely fall coat at the diner to figure out how to make Cinda spill, but all they learn is that Cinda is afraid of tomatoes and slow motion, and that Poppy’s go-to order is a liverwurst and marmalade sandwich. (The waiter says that even Bunny thought it was gross.) Mabel gets a call from Detective Williams and figures out the killer’s identity, and the meaning of Bunny’s last words “14” and “Savage.” But she doesn’t explain yet.

At Bunny’s old apartment, Charles, Mabel, and Oliver gather their friends at the Arconia to stage a “killer reveal party” that they will livestream to their OMitB podcast fans, in hopes of getting Cinda to confess to Bunny’s murder on camera. When Cinda and Poppy arrive, all is going according to plan as they lay out their accusations—they even freak her out with a pantomimed slo-mo act and sliced tomato—but they can’t get her to confess. That’s because Cinda isn’t guilty, Mabel says, Alice (Cara Delevingne), her art collector fling, is. I thought Alice was out of the picture by now, but Mabel’s finger-pointing is purposely out of left-field. Hang with us here.

Mabel alleges that Alice master-minded Bunny’s murder and framed Mabel, the subject of Alice’s art installation, to increase the value of her artwork. She also accuses her of wanting Bunny’s Rose Cooper painting but it cost $14 million, well out of her price range. Enraged at Mabel’s claims, Alice grabs a knife from the table behind her and turns to stab Mabel, but Charles steps in and the blade goes right in his stomach. He collapses to the ground. Oh no, is he dead?!!?!?

While the panicked Arconians wait for the ambulance to arrive, Cinda approaches Mabel and congratulates her on solving the case. She even offers her a job on her staff and her very own podcast—but this ticks Poppy off. After all the dry cleaning she’s picked up, all the mail she’s fetched, and the lunches she’s made, Cinda won’t give her a podcast, but she’ll offer one to Mabel? As Poppy unravels, so does the rest of the mystery. She starts sneezing, like Lucy caught the killer doing in the walls of the Arconia the night Bunny was killed. She admits to her knowledge of the Rose Cooper painting. Cinda reveals that she knows Poppy is really Becky Butler. Charles (who is alive! the stabbing was faked with props), Oliver, and Mabel told her earlier that day. Mabel reveals that on the phone, Detective Williams confirmed the DNA on the murder weapon matched with a “dead girl” from Oklahoma. (Becky Butler.) And Mabel figures out that Bunny’s “14 savage” phrase was actually the #14 sandwich in the diner menu: liverwurst and marmalade, Poppy’s favorite. 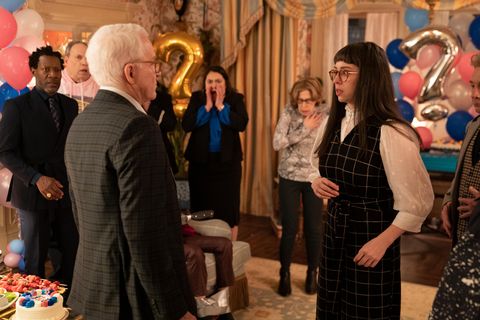 The NYPD enter and arrest Poppy/Becky (or as Oliver suggested, Boppy). Officer Kreps (Michael Rappaport) is in the hall, already in cuffs. The foul-mouthed cop, it turns out, is dating Poppy, not Cinda. After meeting her in Chickasha during the Becky investigation, the two fell in love and he helped her with her ambitious scheme, hoping that solving the case would lead to his promotion. Clearly, that plan exploded like a glitter bomb.

The episode ends with Charles, Mabel, and Oliver closing another season of their podcast. With another murder solved, maybe they can finally live happy lives and have a normal friendship. Charles returns to the set of Brazzos to find his character will no longer have to use a wheelchair or have dementia; his screen test scores are so good that the TV network won’t have to worry about killing off his role. He also lands a hot date with his makeup artist, Joy. Mabel is finally renovating her aunt’s apartment with Alice’s help. And Oliver decides to come clean to his son, Will, about his real father, but Will already knows and loves him regardless. “If you’re not my father then I don’t know what a father is,” he says. Their heartwarming moment is interrupted by a phone call: Oliver receives an offer to direct a Broadway play!

Which leads us to the epilogue…

A one-year time jump takes us backstage on the opening night of Oliver’s play. Paul Rudd (!!!) makes a cameo as one of the actors in the production, Ben Glenroy. As Oliver escorts him to the stage, something already feels off. Ben is irritable, as if fresh out of an argument, but he insists “the other guy” is the one Oliver should be worried about. He’s talking about his unnamed co-star, with whom he seems to have beef. Oliver tries to calm him down, urging him to channel these feelings into his performance. Still, Ben says he’s going to kill his co-star or break his legs—but he’s just saying that in frustration, right?

As he gets in position behind the curtains, coughing, Ben is approached by Charles, who’s wearing a similar costume. They share a cold exchange, but Charles says they just have to make it through the two-hour show together. Now it’s clear: Charles is the co-star Ben was talking about. But what went down between them?

“I know what you did,” Charles threatens, then walks away. (What did he do???) 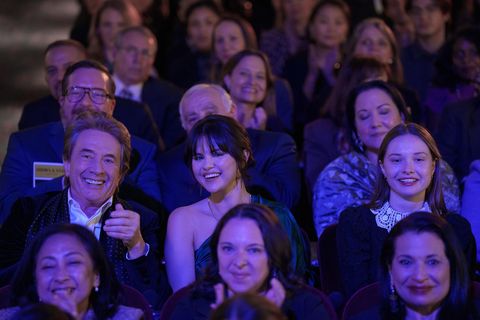 In the audience, Mabel takes a seat with Oliver, Lucy, and Joy right before showtime. Mabel seems happy; the past year has been free of murders, she mentions. But not so fast. When Oliver’s show begins, Ben gets two lines in before he collapses onstage, sending the audience into confusion. Charles is the first to rush out to Ben. “He’s not moving!” he yells to Oliver. Two stagehands attend to Ben as he lies on the floor unconscious, blood dripping from his mouth. Yup, looks like he’s dead.

And so we have our premise for season 3 of OMitB. From the looks of it, Charles, Mabel, and Oliver will now be dealing with a murder outside the building—beyond the majestic stone walls of the Arconia—but the theater setting is a delicious yet fitting twist. And if this means we’ll be seeing more of Paul Rudd next season, I’ll be all over it like a Dimas dip on pita.