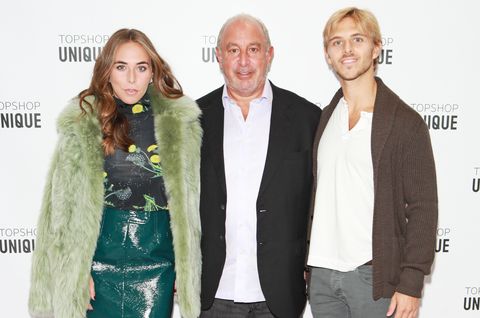 Earlier this month, Emma Watson was photographed walking hand-in-hand through Venice, Italy, with Brandon Green, the son of fashion tycoon Sir Philip Green. The photos are being seen as confirmation of the rumors that Watson and Brandon are in a relationship. In the pictures, Watson was wearing a red and white sundress and black sandals. Her supposed beau was wearing all blue, with a dark navy shirt over a pair of sky blue slacks.

The alleged couple were boarding a boat together to travel through the city on a romantic cruise. A source told the Daily Mail that Brandon has been “wooing” the actress. Here’s everything we know about him so far.

Who is Brandon Green?

Brandon Green is the son of Sir Philip Green, who is known for making enormous amounts of money off fast-fashion with his company the Arcadia Group. In 2020, COVID-19 “severely impacted” sales, but the family still seems to be doing well. The Sunday Times Rich List claims he is worth £910 million. He is a bit of a controversial figure in the U.K. due to some of his business decisions and lavish lifestyle.

His son has often accompanied him to events, especially fashion shows, and he was once linked to model Kate Moss.

Brandon has been taking an interest in climate science and charity.

“He got very interested in biodiversity and saving the oceans,” said a source close to the Greens. “He does a lot of charity work with both Monaco’s Prince Albert’s foundation and Princess Charlene’s foundation…He is very into fitness and gets involved with galas and charities that help the planet. He does frequent beach clean-ups and whatever he can to help.”

Watson is heavily invested in climate activism and attended last year’s COP26 summit in Glasgow. She frequently speaks on the importance of sustainability in fashion.

Friends were apparently “surprised” that Watson was seeing Brandon, though she has said in the past she relies on them to set her up on dates.

They were first pictured together last September when they disembarked from a helicopter in Battersea, London.

Aimée Lutkin is the weekend editor at ELLE.com. Her writing has appeared in Jezebel, Glamour, Marie Claire and more. Her first book, The Lonely Hunter, will be released by Dial Press in February 2022.