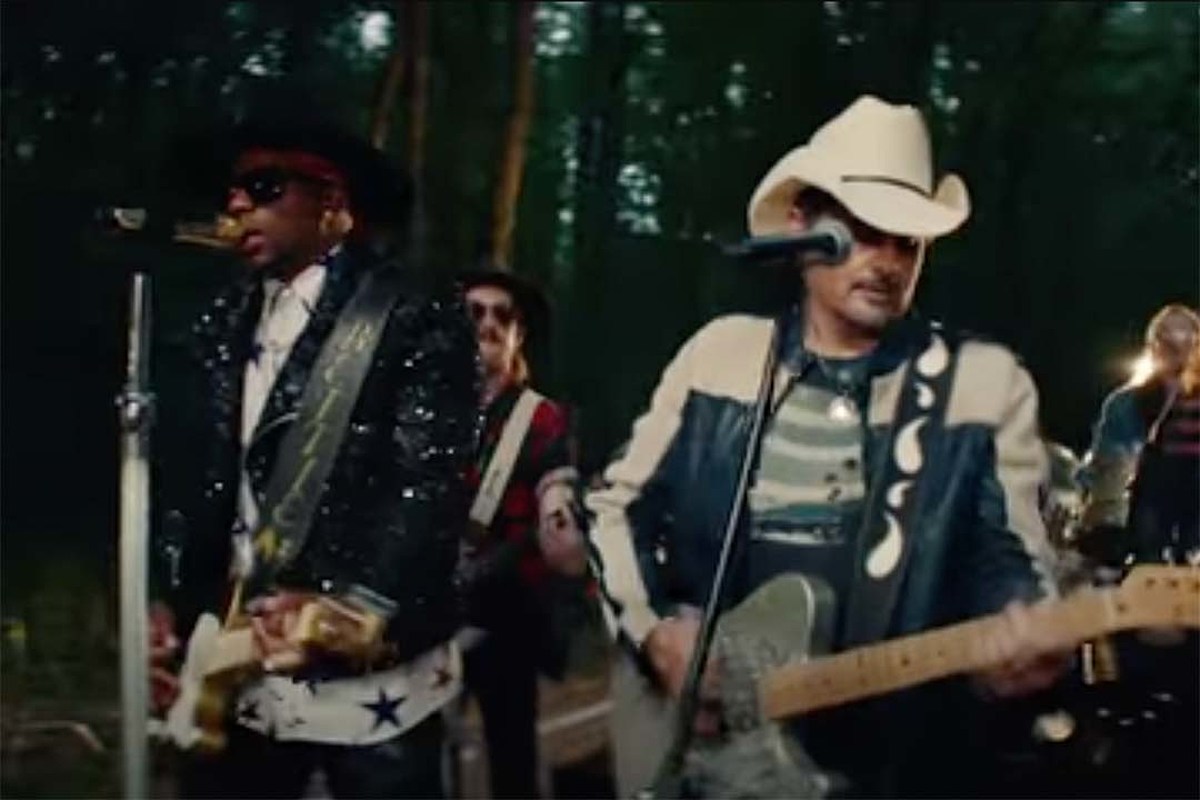 Jimmie Allen and Brad Paisley take the open road in the music video for their collaborative song “Freedom Was a Highway.”

The video opens with Allen leaving church, overcome with the sudden urge to get in his car and drive deep into the woods, where he stumbles upon a guitar hiding amongst the trees. With a strum of the magical instrument, Allen’s bandmates appear in the middle of the road, the singer taking lead vocals on the mic.

Soon, Paisley joins him on the back of a truck bed, and the two sing and play guitar under a bridge before going into full rockstar mode. Decked out in a jeweled jacket, shades and a cowboy hat, Allen draws cheers from the crowd forming around them, the people in the audience waving sparklers in hand as confetti flies through the air.

“I miss those days when our dreams were there for chasin’ / But time was better wasted,” the pair sing. “We were summer young and livin’ for a Friday / And freedom was a highway.” At the video’s end, Allen — who also serves as co-director of the clip — returns back to reality, with nightfall cast all around him.

“When I was writing this song with my co-writers, I imagined myself driving down my favorite roads in Delaware,” Allen remarked of the song following its January release. “This song takes me back to simpler moments such as an innocent, childhood crush on the next-door neighbor or feeling freedom in the wind as you drive with the windows down. I’ve loved this song from the creation.

“I’m a huge admirer of Brad Paisley. I love what he brings to music and I had to have him bring that same magic to this song,” Allen adds. “I’m humbled to have him join me on this song — he brought the freedom to the highway.”

“Freedom Was a Highway” is featured on Allen’s latest album, Bettie James Gold Edition. It’s currently inside the Top 25 on the Billboard Country Airplay chart.

Newcomers Willie Jones and Walker Hayes also make the list with earworms we don’t want to quit. Not every hot summer song needs to be a good-time party song, and not every good party song will make a great summer playlist. Our Top 10 embraces a range of emotions and experiences. What would summer be without summer love or summer heartache, or a bit of nostalgia?
Scroll down to see all 10 songs on this list of the hottest summer country songs. It’s part of Taste of Country’s summer Hot List, an annual report on the songs and artists set to bake this year.
This article was originally published by Theboot.com. Read the original article here.
Music
Share on Facebook
Share on Twitter
Share on Pinterest
Share on LinkedIn