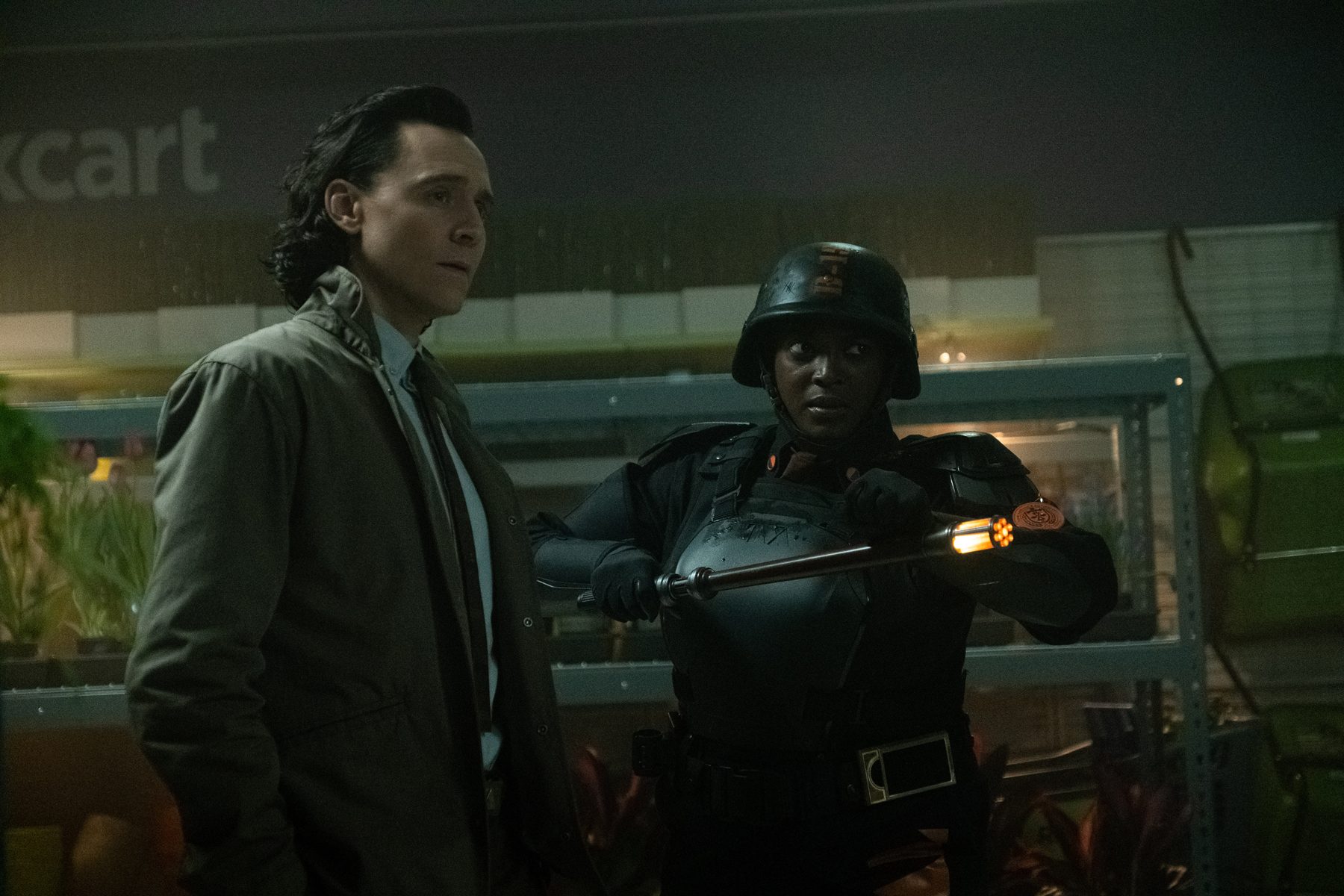 A review of this week’s Loki, “The Variant,” coming up just as soon as your salad is Asgard…

The Loki series premiere at times felt like a challenge: How much could the fundamental charms of the show’s two leading men overcome ream after ream of exposition about Loki’s past and how the Time Variance Authority works? “The Variant” still has some TVA info-dumping to do, plus more of this version of Loki catching up on MCU events he missed. But there’s not nearly as much of that as in the premiere, which gives the hour time to settle into the show that Loki actually might be, which is…

This is, perhaps, not a surprise. Not only was Mobius basically introduced as a time detective, but television’s default is often to turn any piece of intellectual property it can into a cop show — particularly when said property is complicated and doesn’t necessarily lend itself to episodic storytelling. Heck, there are going to be six seasons of Lucifer himself helping out the LAPD, in a show that has almost no resemblance to the comics on which it’s based. Lucifer has many fans, as did Sleepy Hollow (where Ichabod Crane worked with law enforcement) and others before it. So you can understand why Michael Waldron and company (this ep was written by Elissa Karasik, and again directed by Kate Herron) might have leaned into such a reliable format, even if it seems like aiming low for the all-powerful combination of Loki and the TVA(*).

How to Watch ‘Loki’ Online: Stream the Marvel Show for Free On Disney+

(*) Also, in fairness, the TVA’s first real comics exposure involved Thor battling Justice Peace, a Judge Dredd parody who is, yes, a time cop. So this is less of a stretch than it was for Lucifer.

But by the time this second chapter is through, things have changed enough that it appears as if Loki and Mobius as buddy cops may just be one phase among many for the series. It’s similar to how we glimpse so many other Loki variants in this episode, including a Hulked-out Loki, a satyr Loki, and, in the episode’s concluding scene, the female Loki (played by Sophia Di Martino) who is the target of Mobius and the other TVA agents. Loki could just be a cop show, but does it want to be a lot more?

For a few minutes, it seems as if we will, in fact, be settling into a case-of-the-week structure set largely in and around the 1985 renaissance fair where Lady Loki(*) attacks several TVA agents and abducts Hunter C-20 as part of whatever her scheme is. And the chemistry among the leads, plus the understandable and entertaining skepticism from characters like Ravonna and Hunter B-15, would probably be enough to sustain that storytelling model. But both quickly turn out to be right to be skeptical, and the ren fair visit is cut short when it becomes obvious that our Loki (more or less) is just jerking them around to try to get access to the Time-Keepers.

(*) She is, of course, just Loki from another timeline. But for the purposes of clarity, let’s go with a nickname that fandom has used over the years to refer to Loki’s various comic-book stints as a woman. (In the credits, she’s referred to as “The Variant,” but that’s less fun.)

But Loki is likely the god of loopholes along with lies, chaos, etc. Back at TVA headquarters, he keeps trying to find out more about the Time-Keepers, and in the process reads the file on the events of Thor: Ragnarok. The movie is mostly played for comedy, so the destruction of Asgard, and the deaths of heroes like Fandral and Volstagg, don’t hit us with the force with which they land on Loki as he reads the file. (The film doesn’t treat these tragedies lightly; they’re just not the point of the exercise.) As much as he resented Thor and his friends, and schemed against his adopted father’s kingdom, a part of Loki resents still feels deeply connected to Asgard. He’s not hearing Led Zeppelin or snappy Hulk-Thor patter as he learns about these events, and he’s genuinely broken up by them. It’s a clever inversion of one of the franchise’s most beloved films, and one that gives Loki the idea that eventually leads him to his female counterpart.

At first, it seems as if our man is scheming to go directly to the events of Ragnarok to prevent it, not realizing (as his brother explained to Sacred Timeline Loki) that Ragnarok had to happen to save the remaining people of Asgard. But he accepts going instead to Pompeii, right before Mt. Vesuvius erupts, to test out his theory that temporal anomalies are impossible in the vicinity of extinction events. And once he’s proven right, he and Mobius figure out that their target must be hiding out inside one of the many brutal climate change-caused storms of the mid-21st century(*).

(*) Depending on how the next couple of decades go, this could either play very funny in hindsight, or every Disney+ server will long since be underwater.

The sequence inside the doomed Alabama big box store (owned by nefarious Marvel mega-corporation Roxxon) feels more sluggish than tense at times. But eventually, it gets us to the point of the whole episode, and possibly this season: Loki versus Loki, each one convinced they are smarter than the other, and Lady Loki — who first appears to our guy by possessing Hunter B-15 and other people at the store — pretty clearly seeming to be correct about that. Like the male Loki, she is looking for the Time-Keepers, but she has a more clearly thought-out plan than whatever he seems to be cooking up. Eventually, even Gentleman Loki seems to realize that he’s outmatched, and he follows Lady Loki through her portal, while the TVA itself seems to be under attack.

Whether he is jumping ship or simply going undercover will have to wait for next week’s episode (which, like the rest of the season, reviewers won’t be seeing in advance). Most likely, the creative team will not want to keep Tom Hiddleston and Owen Wilson apart for very long, and we may be back to them examining temporal crime scenes within the next 20 minutes of story time. But what little we see of Di Martino in the titular role suggests some fun times are ahead of us.

* Somewhere deep in the DNA of modern comic-book shows is a gene sequence that seems designed to get viewers guessing about whether certain characters are really other characters altogether. Sometimes, that kind of speculation pays off when an Agnes on WandaVision turns out to be Agatha Harkness. And sometimes it can feel like wasted effort, or like the show is just trolling the audience, like all the speculation about Mephisto and/or Reed Richards appearing on the aforementioned WandaVision. I generally find it more fun to take characters at face value and be surprised if they turn out to be someone else in disguise. That said, these two episodes have featured a bunch of moments acknowledging that Mobius knows very little of his own history, in a way that could allow the show to reveal him to be a different pre-existing Marvel character. Maybe even yet another alt-Loki? Or maybe his lack of history is just there as a counterpoint to his new partner, who has altogether too much messy history.

* Speaking of Agatha, Kate Berlant, who has a small role here as one of the renaissance fair workers, doesn’t look exactly like Kathryn Hahn, but there’s enough of a resemblance that it sometimes takes me a few extra beats when Berlant appears in something for me to recognize that she’s not Hahn. When she’s appearing on an MCU show debuting only a few months after Hahn’s rendition of “Agatha All Along” won our hearts, it is extra double take-inducing. Especially on a show with lots of time variants.

* Several items of note to speculate about in Ravonna’s office, including a snow globe that may be a hat-tip to the classic, infamous final scene of St. Elsewhere (which was more about parallel realities than parallel timelines, but is close enough), and a pen from Franklin D. Roosevelt High School that Mobius suggests belongs to “that analyst you keep on the side.” There is a school named after FDR in Brooklyn, among many other places. Spider-Man’s from Queens and goes to Midtown Science (and also likely wouldn’t be on loan for a Disney+ show, given the shaky relationship between Marvel and Sony). Steve Rogers and Bucky grew up in Brooklyn, but before a school would have that name. So… theories on said analyst?

* The production design on the TVA offices remains perhaps the most impressive part of the whole show, with the endless elevator shaft this week’s highlight.

* Finally, I think I’d feel pretty comfortable betting that all the talk about Jet Skis this week will pay off by the end of the season. As the playwright Anton Chekhov once taught us, if you put a Jet Ski magazine on stage in the first act…