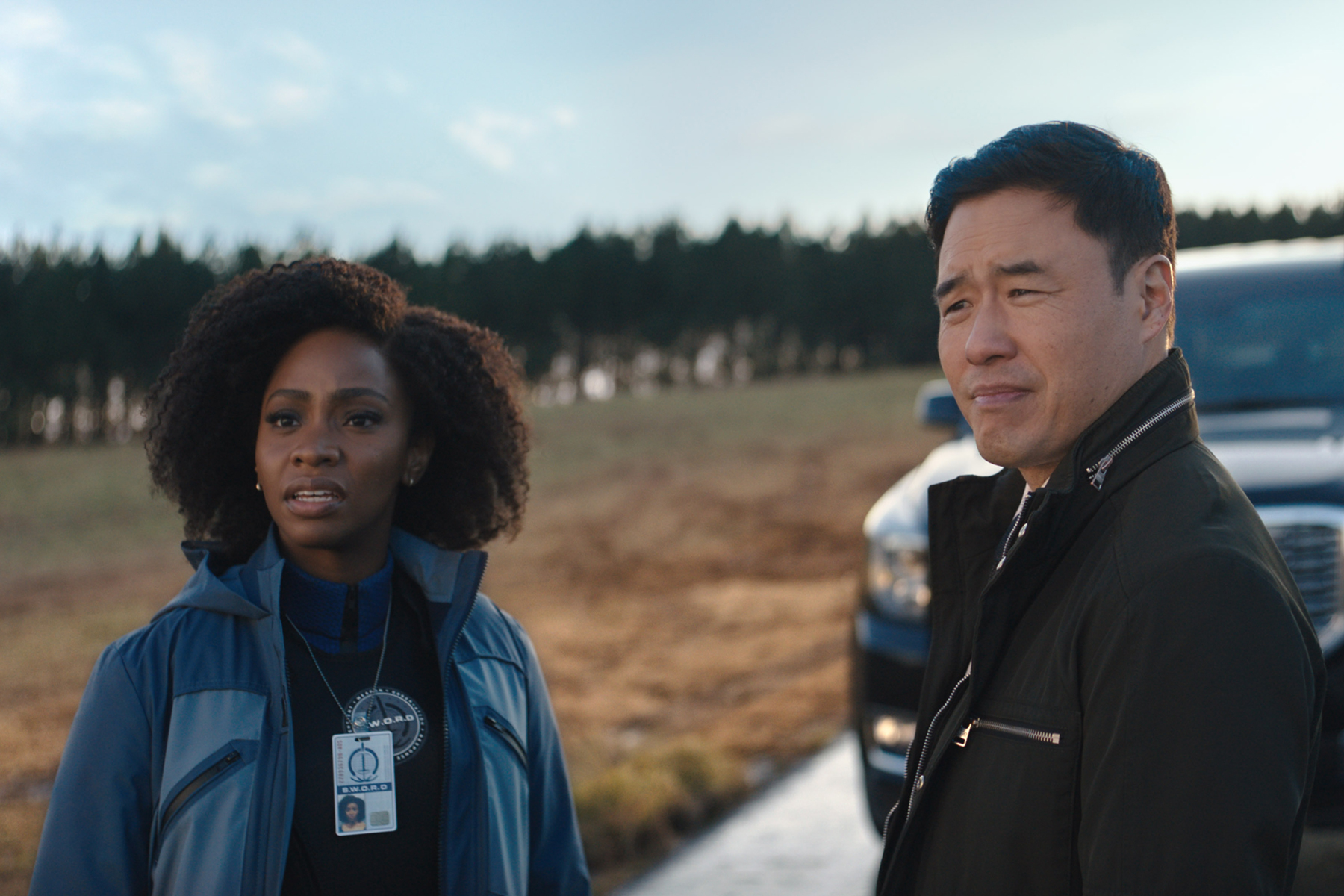 A review of this week’s WandaVision, “We Interrupt This Program,” coming up just as soon as I get the commemorative T-shirt…

As its title(*) suggests, “We Interrupt This Program” takes a break from the weekly sitcom pastiche WandaVision has offered so far. We get glimpses of events from the first three installments — most notably an expanded version of Wanda expelling “Geraldine” from Westview, now presented on widescreen film rather than part of a Brady Bunch episode. But mostly we are seeing what’s been happening outside of Westview, and getting context and explanations for exactly what’s going on, and why.

(*) All the episodes thus far have been named after familiar phrases appearing in TV promos — or in the opening credits of hit shows — of decades past, including “Filmed Before a Live Studio Audience,” “Don’t Touch That Dial,” and “Now In Color.”

The stark shift in POV to answer questions has become a staple of serialized mystery-box shows, going back at least to Season Two of Lost, where multiple episodes rewound the action to show how other people like Desmond or the Tailies experienced events we’d already watched through Jack and Kate’s eyes. These are important episodes to do — especially for a show as light on plot as WandaVision has been through its previous outings — but there’s always a risk that they will play more as a collection of boxes being dutifully checked off rather than a satisfying story in and of itself.

The Wanderlust of Chloe Zhao

From Blockbuster Films to Obscure Shows and Docs, Here’s All the Marvel Content on Disney+

“We Interrupt This Program” makes two smart choices in how it chooses to present its exposition. The first is to open with the revelation that Geraldine is in fact Monica Rambeau, the now-adult daughter of Captain Marvel’s old flying buddy Maria Rambeau. (You can faintly hear a Captain Marvel clip of Carol Danvers nicknaming the young Monica “Lieutenant Trouble” as the episode begins.) Monica has had a lot of superpowered identities in comics over the years (going by Captain Marvel, in fact, as an Avengers mainstay in the Eighties), but here she is an ordinary human who just happens to be a member of S.W.O.R.D., the space-focused counterpart to S.H.I.E.L.D.

Our story opens with an image the MCU movies largely glossed over: Monica and a whole lot of other people who were killed by Thanos in Avengers: Infinity War suddenly reforming from the dust he turned them into. Avengers: Endgame skips right past this event so T’Challah and the others can dramatically enter the final battle, while Spider-Man: Far From Home largely treats the end of “The Blip” as a joke. For the most part, you get the sense that the writers and directors of Endgame (all of them about to move on from the MCU) didn’t really put much thought into the severe mess that would result in 50 percent of the population abruptly reappearing five years after they vanished, not having aged a day. This would emotionally traumatize a lot of people, both those who got dusted and the loved ones who were left behind. This episode at least confronts that notion, by returning Monica to the hospital room where her mom was being treated for cancer five years earlier. As confused and terrified returnees bounce off of overwhelmed hospital staffers, Monica bumps into Maria’s surgeon, Dr. Hartley, who reveals that Maria has been dead for three years. Monica has returned, but it’s not a happy ending, because Thanos robbed her of the chance to say a proper goodbye to the parent she idolized.

This makes Monica an excellent foil for Wanda, since “We Interrupt This Program” leans into the theory that seemed obvious from the start: Wanda is not a prisoner of this sitcom world, but its creator, and she is doing it as a way to cope with the trauma of losing Vision (also at the hands of Thanos) on top of all her other loved ones who died long before their time. We don’t know all the hows and whys of it, but it sure feels like Wanda is retreating into this artificial universe, with its canned laughter and perpetually happy endings, as a way of denying all the suffering she’s endured in her difficult life. Monica’s story isn’t quite the same, but her life has repeatedly been touched by superheroics, and Thanos has hurt her dearly, too. But where Wanda has buried herself — and the 3,892 citizens of Westview, NJ — in fantasy, Monica’s response to her trauma is to return as quickly as possible to the life she knew before she leaped forward five years in time. Her boss, Tyler Hayward — who succeeded Maria Rambeau as head of S.W.O.R.D. — notes that she is the first Blipped agent to report back to work, and also that many of the ones who survived Thanos’ snap became useless after. Lieutenant Trouble is made of tougher stock than that, which is perhaps how she is able to bring the real world into Westview when she mentions Ultron to Wanda.

Monica disappears into the pixelized force field early in the episode, which brings us to its other smart choice. While she’s trapped in TV Land, our eyes and ears become two familiar faces from the MCU: Randall Park as FBI agent Jimmy Woo from the Ant-Man films, and Kat Dennings as Darcy Lewis from the first two Thor movies. Park and Dennings are both very funny actors — she’s by far the highlight of Thor — with deep sitcom experience (him on Fresh Off the Boat, her on 2 Broke Girls), and they’re established enough to many viewers that the episode doesn’t need to stop to explain who they are and what they’re about. If you haven’t seen Ant-Man and the Wasp, you may not laugh at Woo using close-up magic skills to give his business card to Monica, but both actors are such clear presences that they instantly work as our temporary protagonists. (They’re also, frankly, much funnier so far than nearly all of the faux-sitcom shenanigans of the earlier episodes. It helps when you’re given real jokes to deliver, rather than facsimiles of old jokes.)

Because Park and Dennings are so strong, separately or together, the episode’s infodump-heavy nature goes down pretty smoothly. Some mysteries, like how the S.W.O.R.D. drone was transformed into a toy helicopter, didn’t really need explanation to begin with, while the episode is still sketchy on other details, like what happened to Agent Franklin after Wanda “censored” him from the story. But the proceedings clarify that people like Herb and the Harts are Westview citizens trapped in Wanda’s fantasy(*), that these episodes have been spanning decades(**) while barely any time has passed in the real world, and that, yes, Wanda is controlling it all.

(*) The montage of Darcy and Jimmy identifying people in the “show” deliberately avoids giving nosy neighbor Agnes a real name, but you can see her picture on Jimmy’s whiteboard late in the montage. Presumably, Kathryn Hahn is, like Teyonah Parris, playing a pre-existing Marvel character — perhaps a longtime mentor of Wanda’s with a name that sounds a bit like Agnes?

(**) Darcy keeps referring to the first episode as being from the Fifties, even though The Dick Van Dyke Show aired from 1961-66. To spare you a pedantic rant, lines between the decades have always been blurry. As Mad Men so deftly illustrated, the first few years of the Sixties felt very much a continuation of the Fifties, while many of the styles we associate with the Flower Power part of the Sixties didn’t really become popular until the early Seventies. If the intent was to clearly make the first episode a Fifties one, though, it would have been interesting to see something in more of an I Love Lucy mode, even if Wanda would have seemed much more hapless as a Lucy Ricardo type than when she was channeling Laura Petrie.

Really, though, it’s only Wanda’s role in this and Monica’s true identity that seem to matter. Everything in between is mildly interesting, but either something that was easy to guess in prior episodes, or not really necessary for following the larger story. But these are big things. Because Wanda was an Avenger for several films, we assume she is the hero of this tale. But she started out in the MCU as a villain, and in the comics has gone back and forth across the good/evil divide many times. What if she’s the villain of this story, and Monica Rambeau is our true hero? That not only creates a clear goal for the rest of this season, but will do a much better job grounding all the sitcom recreations WandaVision does between here and the end. We know who almost all the players really are, and we know the reasons and the stakes. End prologue, start story for real. A necessary pivot for whatever this series is going to turn out to be.

“Anita Hill Would Have to Agree with Me”: LET’S TALK ABOUT IT Removed from Oak Brook Public Library
The Weeknd Dons a Custom Roots Jacket + More Fashion News
Pierce Brosnan Shares His Blunt Thoughts On The Latest James Bond Movies And The Future Of The Franchise
See Smashing Pumpkins Debut New Single ‘Beguiled’ on ‘Fallon’
PICTURES: Faith Hill Through the Years