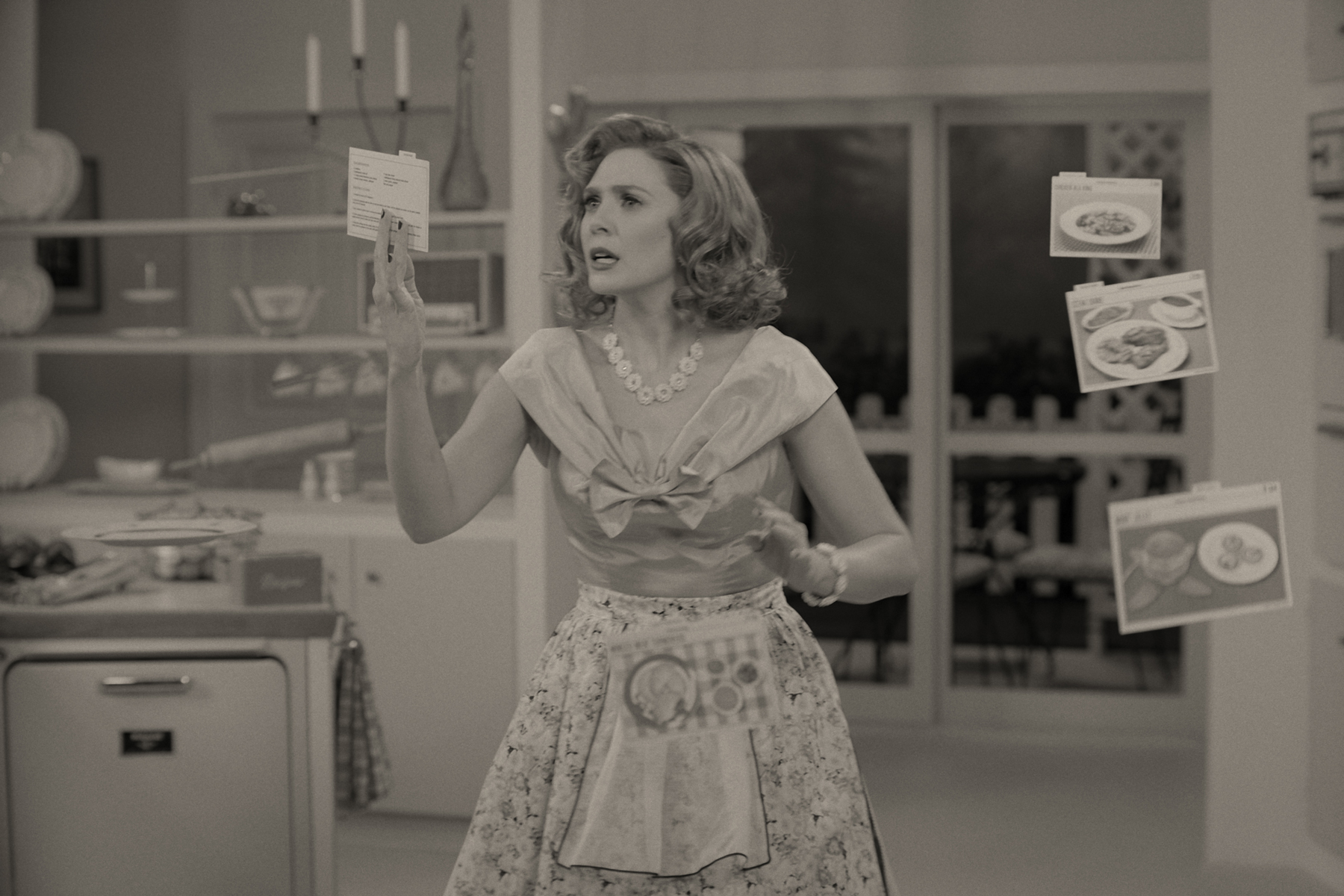 Welcome to Rolling Stone‘s weekly coverage of Disney+’s WandaVision. I reviewed the series yesterday, and have specific, spoiler-filled thoughts on the first two episodes, coming up just as we decide if gum is food…

After that review published, several readers asked how much knowledge they needed of the Marvel Cinematic Universe to follow this show. Knowledge of, and affection for, Nick at Nite, I told them, would probably be way more valuable than remembering which side Wanda and Vision were on in Captain America: Civil War.

Yes, Elizabeth Olsen and Paul Bettany played these characters — or, at least, a different version of the characters that we see here — in multiple MCU films. And, yes, these premiere episodes periodically feature elements of Marvel lore, including fake commercials for both a Stark Industries toaster and a Strucker model watch with a Hydra logo on it, both elements of Wanda Maximoff’s tragic origin story. (A Stark bomb killed her family, while her powers were born when Baron Wolfgang von Strucker used her and her brother Pietro as test subjects for experiments using Loki’s scepter.) And yes, the toy helicopter Wanda finds in the shrubbery in the second episode has the same coloring as Iron Man’s armor (as well as the same sword logo that’s visible in whatever location someone is watching this all play out on TV at the end of the first).

How to Watch ‘WandaVision’ Online: Stream the Marvel Series Now on Disney+

‘WandaVision’: Marvel Studios Bows Down to the Heroes of the Small Screen

But, at least at this stage of things, it seems much more important to know about Rob Petrie falling over the ottoman, and about Samantha Stevens wrinkling her nose:

Since this show all but begs us to get wonky about sitcom history, let’s get wonky. The Dick Van Dyke Show aired on CBS from 1961-66. I Love Lucy had already invented the structure and style of what we think of today as a multicam comedy (i.e., shot on a stage in front of a live studio audience), but Dick Van Dyke feels like just as much of an influence on contemporary sitcoms, if not more. Inspired by creator Carl Reiner’s work on Your Show of Shows and Caesar’s Hour — which, between Reiner, Mel Brooks, Neil Simon, Larry Gelbart, and others, featured arguably the greatest collection of comedy minds one writers room has ever held — it was sophisticated and urbane in a way that Lucy and The Honeymooners hadn’t been, and it largely invented the notion of the workplace comedy. And in Van Dyke (as Reiner stand-in Rob) and Mary Tyler Moore (as Rob’s devoted and witty wife Laura), it had an attractive, charismatic, comically versatile star couple who drew comparisons to John and Jackie Kennedy. (It also became the first big hit TV series to end much earlier than it could have, because Reiner didn’t want to run out of material, while Van Dyke and Moore wanted to give movies a try.)

Bewitched debuted on ABC a few years after Dick Van Dyke. Its mix of stories about the home lives of Samantha (Elizabeth Montgomery) and her husband Darrin (Dick York, replaced by Dick Sargent after a few seasons due to health issues) and Darrin’s work at an ad agency very much owed a debt to the earlier series’ balancing act between the Petries’ suburban home and Rob’s work on The Alan Brady Show. But where Dick Van Dyke had premiered in the early, optimistic days of the Kennedy administration, Bewitched arrived post-assassination, as Camelot gave way to something darker involving Vietnam, the civil rights movement, the counterculture, and, eventually, Nixon. As a result, it was one of a wave of sitcoms from the middle of that decade (see also: The Addams Family, The Munsters, The Beverly Hillbillies, Gilligan’s Island, and Bewitched‘s evil twin I Dream of Jeannie) that tried to offer escape from the increasingly depressing evening news. So Samantha wasn’t the innocent housewife she appeared to be, but rather an incredibly powerful witch whose husband didn’t want her using magic because… he found it emasculating? And/or because he was, like many Americans of the Cold War era, a hopeless conformist?

So why are Wanda and Vision — the latter of whom, you may recall, died in Avengers: Infinity War and, unlike Wanda and half the galaxy, stayed dead at the end of the next film — not only living in suburbia, but in sitcom versions of suburbia modeled on these two shows? Obviously, we have a lot of waiting ahead of us before we find out the in-story explanation for what’s happening, and why. In the comics, Scarlet Witch is much more powerful, and in a more nebulous way, than she’s been presented in the movies. What started out as a vague, deus ex machina “hex power,” which could do something as small as cause a painting to fall off a wall and knock out a nearby villain, in time evolved into the ability to rewrite reality itself if she’s inclined to. So this could certainly be her way of coping with the ongoing grief of Vision staying dead when she did not (and of the horrors of losing the rest of her family earlier). Or it could be outside forces — say, whoever is watching on that monitor? — manipulating her in ways we won’t understand until much later in the season. Wanda — as we’re reminded when she has to cover for all the wacky, magical behavior in front of Vision’s boss, Mr. Hart (played by Fred Melamed) and his wife, Mrs. Hart (That 70s Show mom Debra Jo Rupp) — grew up in the (fictional) Eastern European nation of Sokovia, and perhaps American pop culture just took its sweet time crossing Sokovia’s borders? Or maybe whomever is really responsible for this is a fan?

Of course, in real life, the person responsible for this — in some ways even more than the show’s credited creator, Jac Schaeffer — is Kevin Feige, who orchestrated the entire MCU, and with this series assumes control of Marvel’s TV projects, too. Feige has said that he, like many members of Generation X, grew up loving the comedies of eras past thanks to Nick at Nite, which was the closest thing we had to Netflix in the mid- to late-Eighties. And there’s some symmetry in the first TV series of Feige’s expanded reign being a love letter to TV itself.

But why these two shows, for starters? Why not go back to Lucy Ricardo or Ralph Kramden? It could be that The Dick Van Dyke Show was the first true suburban sitcom (I Love Lucy started out in Manhattan, while The Honeymooners was set in Brooklyn), and that makes it easier to incorporate it into the idea of Wanda and her synthezoid husband retreating to a more peaceful place after all their hectic (and, for him, fatal) adventures. Or it could be that — especially for the era in which they originally aired — Dick Van Dyke and Bewitched were pretty liberated in how they depicted both their female leads and, more importantly, in the women’s relationships with their husbands. Both stayed home and (eventually) raised the kids, but Rob treated Laura as a peer, while Bewitched viewed Darrin as an idiot whose own insecurity was forever hampering his goddess of a wife. (And Samantha got plenty of magic done anyway, while his back was turned.) If we assume that Vision is really still dead, and thus a figment of Wanda’s imagination, or a memory she conjured out of her pain, then it makes sense for her to be in a setting where she’s at least her lover’s equal, if not his superior.

Outside of some stray bits of business (particularly Bettany playing drunk when the chewing gum grinds Vision’s gears in the second episode), neither episode is all that funny, especially compared to their inspirations. (The Dick Van Dyke Show is a sitcom Hall of Famer, and Bewitched was one of the sharper and livelier of its particular sub-genre.) But Olsen, Bettany, director Matt Shakman(*), and company otherwise perfectly capture the look, feel, and sound of shows like these, using stock sitcom plots — a stressful dinner with the boss, an attempt to impress the neighborhood queen bee at a charity event — to illustrate the unreality of sitcoms themselves, and of whatever situation our heroes have found themselves in. Even if you could, as Darrin wished, take away Samantha’s powers, the world of Bewitched felt wholly artificial. And where The Dick Van Dyke Show was classy and relatively down-to-earth, the existence of the studio audience laughter alone makes it impossible to forget that this is all a fiction.

(*) In my review, I neglected to note that in addition to lots of experience directing modern single-camera comedies like It’s Always Sunny in Philadelphia, Shakman was also a child actor who was a regular for three seasons on Just the Ten of Us, a late-Eighties ABC family sitcom that spun off from Growing Pains. It aired in the same programming block as Full House, featuring Olsen’s sisters Mary-Kate and Ashley.

Is that expert mimicry of these ancient shows enough by itself to carry an hour of TV? More or less. And it definitely helps that Vision’s bumbling at the neighborhood talent show — the comic highlight of either episode — comes right around the moment when my enthusiasm for the pastiche as a whole was flagging. (As nosy neighbor Agnes, Kathryn Hahn is a wonder, but even her energy isn’t enough to carry so much time when all the jokes come nestled inside air quotes.) But, like Feige, I grew up on these shows and ones like them. I pity the parents who are watching these episodes with their MCU-crazy kids and then have to explain (if they even can) about the history of American sitcommery, the transition from black-and-white to color TV, gender and racial dynamics of the Sixties(*), and all the other decidedly non-Avenger components swirling around here.

(*) Teyonah Parris may as well be wearing her Mad Men wardrobe in her role as Wanda’s new neighbor, Geraldine. The world of WandaVision is a bit more integrated than sitcoms of the period were, with Asif Ali as Vision’s co-worker Norm, and David Payton as neighborhood watch leader Herb. Actors of color were able to find supporting or recurring roles here and there before Diahann Carroll broke major ground by starring in Julia in 1968, but it was still pretty rare to see non-white faces on sitcoms of the time. The more inclusive casting here could be yet another sign of how nothing is what it appears to be, or it may simply be the makers of WandaVision taking advantage of this heightened construct to find one small way in which their sitcom world can be more realistic than its influences were.

Is this good? That remains to be seen. Is it catnip to a TV critic of a certain age? Mostly. But we still have to let the mystery play out. Back next week to talk about the show’s latest sitcom influence, and also about some slightly more prominent hints about what is and isn’t happening here.