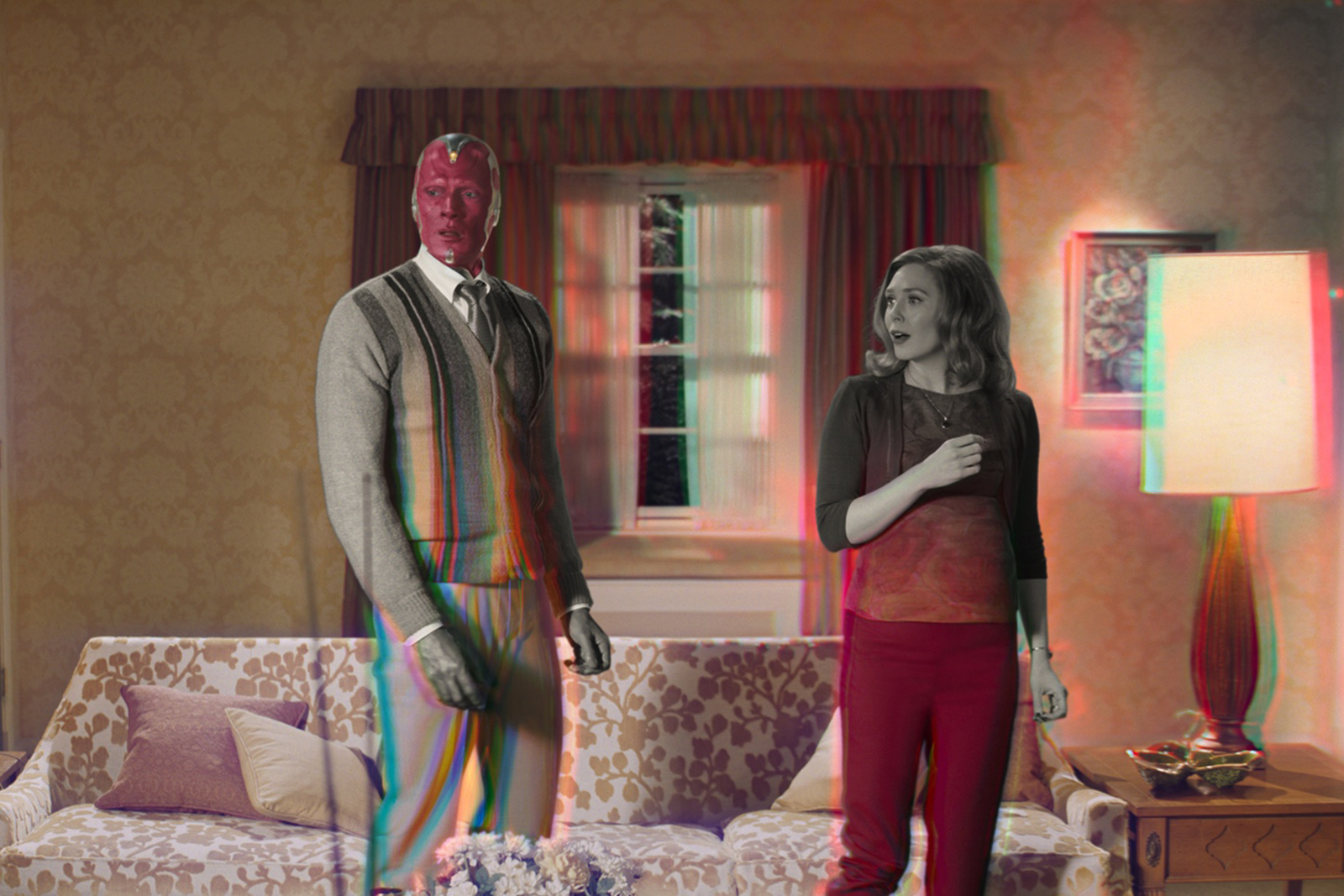 The Disney+ superhero series WandaVision opens with something brand-new to TV shows based on Marvel Comics characters: the Marvel Studios fanfare and logo, complete with glimpses of Iron Man and other figures from the Marvel Cinematic Universe, which was previously only attached to Marvel’s films. Earlier Marvel shows like Agents of SHIELD, Jessica Jones, and, Groot help us, The Inhumans were produced by a separate division of the company. Now — in part because most of those shows weren’t very good — Marvel Studios boss Kevin Feige is in charge of every project, film and TV both. And it’s that fanfare, at least as much as the presence of Avengers alums Elizabeth Olsen (as Wanda Maximoff, a.k.a. the Scarlet Witch) and Paul Bettany (as synthetic man the Vision), that promises that WandaVision will look and feel much more like these beloved and wildly successful movies than anything made under the old Marvel TV banner.

Then the fanfare ends, the picture turns black and white with the old 4:3 aspect ratio of a 20th century TV show, and the premiere of WandaVision turns out to be… a pastiche of The Dick Van Dyke Show?

Trailers of the Week: ‘Locked Down,’ ‘Search Party,’ ‘PVT Chat,’ and More

Triple Play: This Hack Gets You Hulu, Disney+ and ESPN+ Together For Just $13

Bruce Springsteen on Making ‘Born to Run’: ‘We Went to Extremes’

That’s not all it is — and not just because the other two episodes Disney gave to critics feature extended riffs on Bewitched and The Brady Bunch. There is clearly more going on than just the title characters moving to an artificially picaresque suburban neighborhood, starting with the fact that Vision is alive at all, after being one of the few heroes who stayed deceased at the conclusion Avengers: Endgame. But the great majority of these early episodes involve Olsen, Bettany, and their co-stars — including Kathryn Hahn as nosy neighbor Agnes, Mad Men alum Teyonah Parris as the friendlier Geraldine, and a host of other familiar faces, such as Fred Melamed, Debra Jo Rupp, and Emma Caulfield — cosplaying as Sixties and Seventies multicam sitcom characters, with most of the dialogue delivered in a clichéd setup/punchline pattern greeted by raucous off-screen laughter.

That Feige and company — including lead director Matt Shakman (It’s Always Sunny in Philadelphia, Game of Thrones) and creator Jac Schaeffer (Black Widow) — would kick off this new small-screen phase of the MCU with such a weird, full-throated experiment might seem counterintuitive. Certainly, the safer play would have been something like the upcoming The Falcon and the Winter Soldier, which looks to be much more in the same vein as the Captain America films that introduced its dynamic duo.

But the sheer oddity of WandaVision (as a superhero-adjacent project, at least, since sitcom parodies have been around forever, in forms ranging from Trey Parker and Matt Stone’s short-lived White House comedy That’s My Bush! to Adult Swim’s 2014 earworm Too Many Cooks) makes sense as a statement of its own. Even though we’re still waiting for shows featuring Falcon, Winter Soldier, Loki, and other faces from the movies, it’s not hard to imagine what they will look and feel like, because we’ve seen nearly two dozen movies shepherded by Feige, and have grown used to the rhythms, the tone, and, roughly, the level of execution of them. Some MCU films are uniquely good (Black Panther) or uniquely not-good (Thor: the Dark World), but they’re all built on the same assembly line, within fairly strict parameters and consistent degrees of oversight. A season of television isn’t just a long movie, nor should it try to be, but Marvel landing on Disney+ with a slightly TV-ified version of a Thor or Captain America film wouldn’t feel like much of a thrilling accomplishment.

By instead kicking things off with our heroes’  adventures in TV Land (or perhaps Nick at Nite), WandaVision gets to demonstrate just how elastic the Marvel brand can be. And after Endgame may have taken the original MCU formula as far as it can go, demonstrating that these characters are more versatile than they appeared seems like a very clever idea. When that versatility is wrapped in a meta love letter to the medium in which Feige and company now get to operate, all the better.

It’s also a big risk, though, because WandaVision starts out demanding as much affection for television from its audience as from its creative team. If you don’t instinctively smile at the sight of Vision using his powers to phase through an inconveniently-placed chair — a tip of the cowl at the iconic Dick Van Dyke Show opening credits gag where Rob Petrie tripped over an ottoman — or recognize that one episode takes place in a mirror image of the Brady family’s house, you may grow impatient for the actual story to reveal itself.

Or maybe you’ll be so caught up in the sheer energy and commitment that Olsen, Bettany, Hahn, Shakman, and company bring to these loving homages that it won’t matter if you can tell that the second episode’s animated opening credits make Bettany resemble first Bewitched husband Dick York rather than Dick “Second Darrin” Sargent.

In their non-Marvel roles, Olsen and Bettany are best known for intense dramatic work; in their last TV roles alone, she played a grieving widow in Facebook Watch’s terrific, underseen Sorry For Your Loss, while he was the Unabomber in Manhunt. But Olsen also grew up around sitcom sets (her twin sisters Mary-Kate and Ashley, you may have heard, shared the role of Michelle Tanner on Full House), while Bettany has mixed in light comic parts when he can (even in otherwise heavy material like Master and Commander). As Vision and Wanda begin new suburban lives — him as a middle manager at a computer company whose purpose he can’t figure out, her as a housewife whose powers do all the cooking and cleaning for her — both are a pleasure to watch, with Olsen going joke for joke against both Hahn (gnawing on the scenery for all it’s worth) and That 70s Show mom Rupp, and Bettany doing some inspired physical comedy when an accidentally swallowed hunk of chewing gum makes him act drunk in one episode. The look and feel of each episode is true to the spirit of its respective sitcom era as much as to any one show, as it’s clear everyone did their homework(*).

(*) In that respect, Shakman is as much a star of the show as Olsen and Bettany. So much of what works rests not only on the recreations being convincing, but also on the intrusions of MCU reality looking and sounding particularly unnerving. As a guy who’s directed a lot of comedy and drama, and who has past experience of doing elaborate tribute episodes — like the Always Sunny homage to Birdman, shot in what looked like a single take — he’s all that you could hope for in a strange project like this.

But these are all remarkable sitcom simulations, rather than the actual thing. The jokes sound like the kind you might hear on Dick Van Dyke or Bewitched, but they’re almost never actually jokes. (A cynic might suggest that this makes the third installment indistinguishable from a real Brady Bunch episode.) In a way, this is helpful in grounding the action and making clear (in addition to some other stray clues) that very little of this life is what it appears to be to our heroes. But a little of this fun-but-not-funny approach goes a long way, especially in a show designed to be released weekly. These are essentially sketches; they’re executed at a high level, but not really built to run around a half-hour apiece. The third episode starts offering slightly larger hints about what’s happening, and Disney+ is at least wisely releasing the first two episodes tomorrow, so viewers won’t have to wait forever for the story to get moving (assuming that it eventually will).

Copying the form of classic sitcoms from decades past also forces WandaVision to structure itself like a television show in a way that a lot of the ousted Marvel TV regime’s work couldn’t be bothered to do. That’s as much of a victory as putting Marvel’s movies and shows on equal footing. But at least for now, WandaVision shares a problem with all those defunct Defenders-adjacent shows (even if it’s livelier than all of them): Some inspired moments start to lose their effectiveness because there’s less story than there is time to fill. But a new regime brings with it a greater chance that the payoff will justify the patience, especially since there’s such a bounce to things along the way.

Luke Combs Talks Miranda Lambert Duet, ‘Outrunnin’ Your Memory’
Inside The Deep End: The Rise of Teal Swan and Her Controversial “Completion Process” Program
Religious university ordered to recognise LGBTQ+ students in stunning ‘victory for human dignity’
Where to Get That Cute Tie-Dye Hoodie on Only Murders in the Building
Han Just Got Reunited With His Tokyo Drift Car While Fast X Films, And It’s Like No Time Has Passed At All