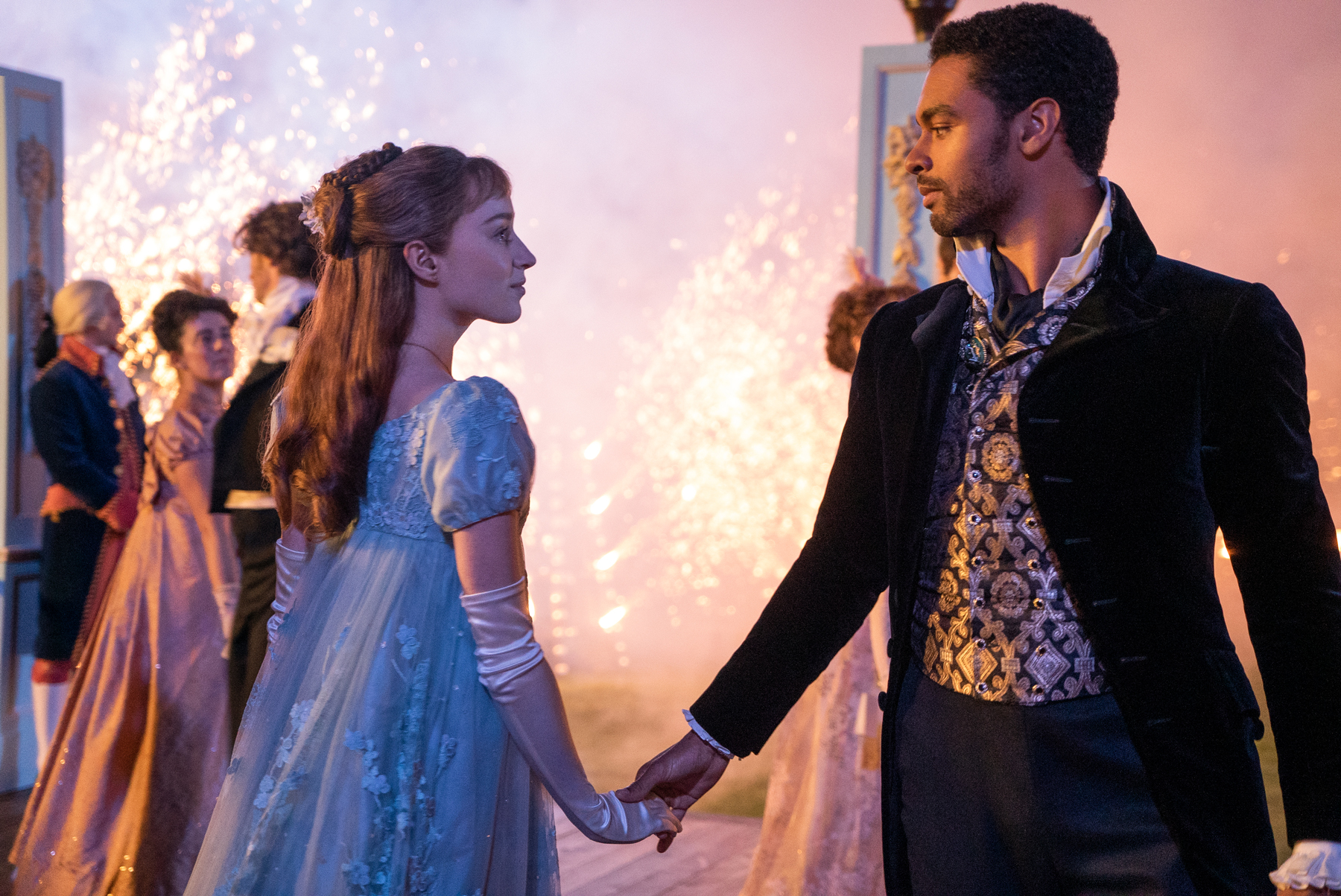 It is a truth universally acknowledged that wherever Shonda Rhimes hangs up her shingle, juicy television follows. Even when the proceedings border on being silly enough to interrupt our suspension of disbelief, the fact remains that we’re having too much fun to care. Bridgerton, the first series out of the gate in Rhimes’ blockbuster production deal with Netflix (reported to be worth $150 million, but possibly north of $300 million in reality), carries this DNA in its heart. A frothy romp through the high society of Regency-era England (that’s early-1800s to the monarchically challenged), it offers up sex, intrigue, romance, scandal, sex, gossip, and did we mention the sex?

Though Rhimes is but an executive producer here, showrunner Chris Van Dusen, a protégé who worked closely with Rhimes for 15 years on shows from Grey’s Anatomy to Scandal, applies all he’s learned and then some in adapting a series of popular romance novels by Julia Quinn. Rhimes may not have ditched ABC just to show toned men’s butts and virginal young women’s orgasms, but the creative team is certainly leaning into the streamer’s more laissez-faire management style. Dear viewer, some bodices may have been ripped in the making of this series.

‘The Midnight Sky’: It’s the End of the World and Clooney Takes It in (Too-Serious) Stride

Robin Williams: The Triumphant Life and Painful Final Days of a Comedic Genius

But it’s not just for all the carnal pursuits that Bridgerton feels utterly devoid of the heaviness that makes so many period pieces a drag. Its eight episodes — each an hour that feels like less — are laced with feminist undertones and light but surprisingly sharp humor. The score features orchestral versions of current-day pop hits by Ariana Grande and Billie Eilish. Not only that, the series is grounded in diverse casting that treats the idea of black and brown people among England’s landed gentry (and indeed its royalty, as the show’s Queen Charlotte, played by Golda Rosheuvel, is black) as not only plausible but a matter of historical fact. Like its Apple TV+ compatriot, Dickinson, this is a show where historical sense meets modern sensibility.

The main storyline follows London’s most eligible bachelor, the rakish yet debonair Simon Basset, a.k.a. the Duke of Hastings (Regé-Jean Page, who can cock an eyebrow like nobody’s business), and most desirable debutante, Miss Daphne Bridgerton (Phoebe Dyvenor), of the series’ titular noble family. The duke has the looks and the largesse to secure any well-heeled woman he sees, yet he wants none of them — not for life, anyway. Daphne, meanwhile, has lost her luster following the arrival of a beautiful new girl on the scene, and must do whatever she can to lock down the right kind of suitor, lest the reputation of her entire family suffer permanent and devastating damage.

A series of machinations ensue, in which the pair use one another as a means to each of their ends, all the while setting the wig-erati atwitter. Their faux courtship, on display throughout “ball season” and chaste strolls through the city’s parks, is tracked closely by the tsk-ing gossip writer of the day, Lady Whistledown, a mysterious figure whose weekly newsletters are breathlessly awaited and pored over by the moneyed set. (With an assist from the great Julie Andrews, these missives also provide scene-setting voiceover narration that introduces each episode.)

Along the way, we meet a variety of characters fighting within the confines of the time for the right to pursue their own version of happiness. Daphne’s oldest brother, Anthony (Jonathan Bailey), is hopelessly in love with a woman of ill repute — an opera singer (Sabrina Bartlett) whose only route to financial security is to welcome male benefactors backstage and play to their desires. Her musical talents put her miles above any of the pianoforte-playing girls whose dutiful plonking is pursued only in the name of snagging a husband. But her skills are not bankable, economically or romantically.

Another Bridgerton brother, Benedict (Luke Thompson), has an artsy streak that brings him to underground sex-and-sketching parties where lascivious nude models and swinging couples abound. His sister Eloise (Claudia Jessie), ever scribbling in a journal, is the creative sort, too — she would happily jettison all romantic prospects if she could only pursue a career as a writer. Meanwhile, her friend Penelope Featherington (Derry Girls’ Nicola Coughlan, tapping her endearingly nervous energy) wishes for both love and the license to have a brain. And then there’s Penelope’s cousin Marina (Ruby Barker), who chased passion to a logical but damning conclusion: an unwed pregnancy that she must make every effort to conceal.

In the last third of the series, one character’s sex education takes over the story, plunging it into a sort of Jane Austen-meets-Skinemax vibe and throwing it a bit off-balance. And the Duke’s aversion to commitment is explained by a clichéd bit of pop psychology. But Van Dusen makes Bridgerton’s many twists and turns satisfying to the end, even when they’re predictable, and the young cast of mostly unknowns brings zip and depth of feeling to material that could otherwise feel slight. There’s a charming wink to it all — this is a show that knows exactly what it is, and wears (or removes) its corset proudly. In less sure hands, Bridgerton could be filed away as a porny trifle. Instead, it’s a breezy waltz through a world of balls and duels, courtiers and curtseys, true love and ladies who may not be so interested in waiting.