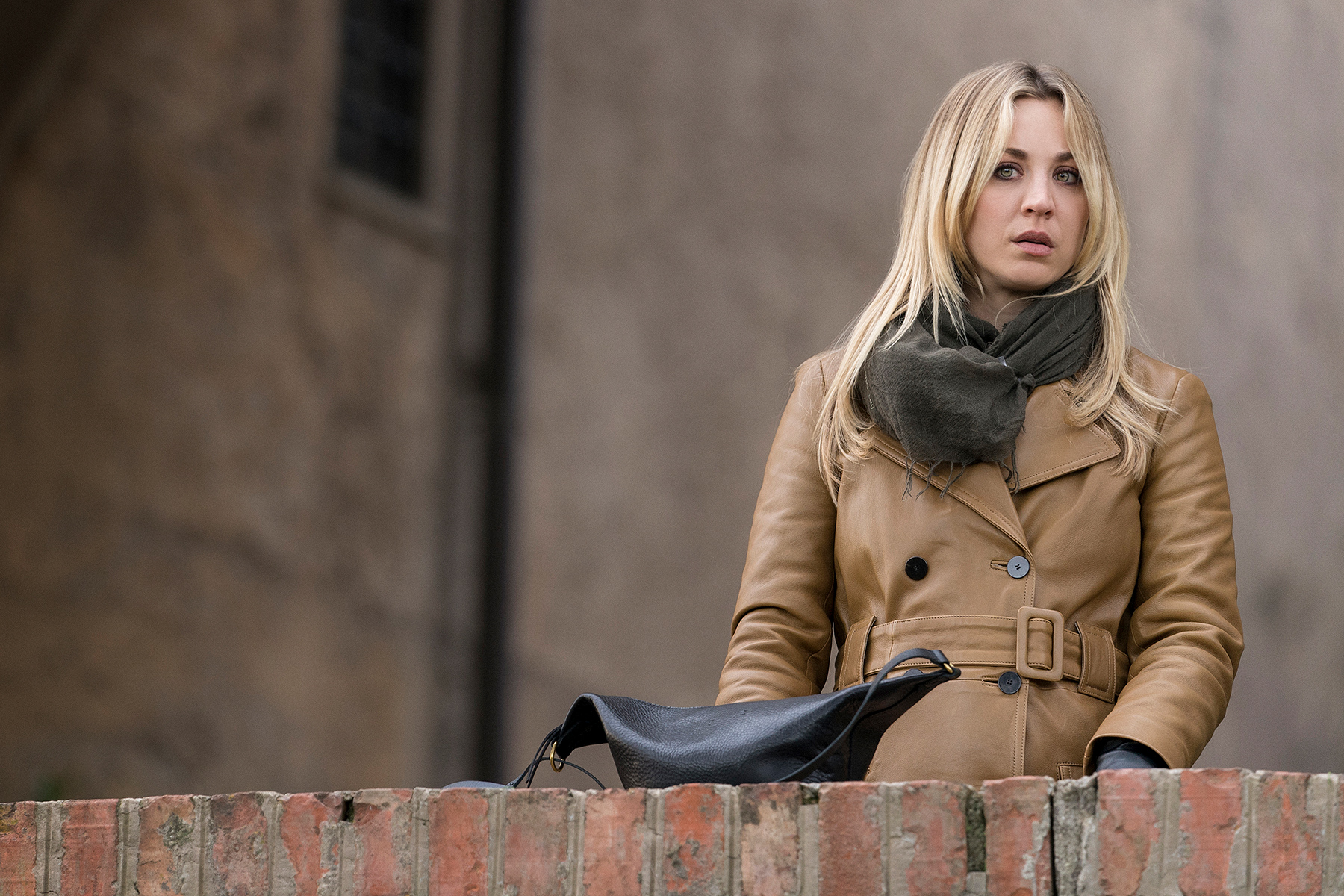 This post contains spoilers for The Flight Attendant, whose finale is now available on HBO Max.

Back when I used to travel to places in the before time, I would greet the sound of the plane’s wheels touching down on the runway with an exhalation and a little smile. I knew the odds were highly in favor of a safe landing, but it was still reassuring to hear that thunk. When a television show I’m enjoying is about to come in for a landing, I hold my breath more deeply, because the odds are much longer of making it to our destination in one piece. So many things about the way the medium operates work against the idea of a good finale, successful endings can feel like happy accidents.

I was particularly anxious about the conclusion of The Flight Attendant, the comic thriller miniseries starring Kaley Cuoco in the title role as Cassie, a hot mess who wakes up in a Bangkok hotel suite next to the bloody corpse of Alex (Michiel Huisman), the rich man she spent a boozy day and night with. HBO Max only gave critics the first four of eight episodes, and both the mystery and rumblings that producer Cuoco wanted to make a second season had me worried that the finale would rob Season One Peter to pay a hypothetical Season Two Paul.

Watch ‘Tenet’ Online: Here’s How to Stream the Film On-Demand From Home

Grateful Dead Albums: The Best of the Rest

But this version of The Flight Attendant touches down beautifully. It provides a satisfying resolution to most of the stories about Cassie and her friends, while also offering a plausible framework for how another season might work.

In the process, it offers up a lesson a lot of the TV industry — which historically has rarely done well with endings — would do well to follow.

American TV was built on the idea of disposable excess. Series were meant to run for as long as they remained profitable, rather than for as long as there was life in the story. And when the cash ran out, executives assumed the audience’s interest did too. In 1967, when the producers of The Fugitive asked their bosses at ABC for money to write a proper conclusion to the story of wrongfully accused physician Richard Kimble, they were laughed out of the room, and had to turn to their sponsors to fund it. The producers had the last laugh, though: “The Judgment” was for years the most watched episode of television ever made by far, before it was passed by another series finale, for M*A*S*H.

The success of those finales at least made it possible for big hits to write definitive endings, but the business model still demanded that shows keep going, and going, and going, well past the point of diminishing returns. (More than 106 million people watched the M*A*S*H finale, but few of them would likely cite the last few seasons leading up to it as their favorites.) The tide began to turn in the early 2000s, when producers of shows like Lost and Battlestar Galactica were able to convince their respective networks to let them end things early, on their own terms(*). But for every show that knew exactly when and how to wrap things up, there were three times as many that just couldn’t resist going, and going, and going, until eventually everyone hated Ted Mosby on How I Met Your Mother or Dexter from Dexter became a lumberjack.

(*) Ironically, both of those finales were divisive, but it’s hard to imagine either series running for several additional years and pleasing viewers more in the process. Imagine the Twitter taunts Damon Lindelof would have had to endure from people who felt that Lost had wasted eight years of their lives, rather than just six.

By the mid-2010s, though, another option came back into vogue: the miniseries. Here was an idea that took advantage of TV’s extended time for plot and characterization, while also providing a definitive and relatively close end-point. Even anthology miniseries like American Horror Story and Fargo were able to treat individual seasons largely as their own thing, wrapping up that year’s story in 13 episodes or fewer. And for a while, this seemed like a great compromise. Some stories are meant to be finite, and limited series created a shorter commitment for actors who might not otherwise want to work in television.

That compromise has unfortunately come undone over the last few years, with one seemingly limited series after another returning for additional seasons. The most prominent of these was Big Little Lies, which literally won the Emmy for Outstanding Limited Series in 2017, then came back two years later with a Season Two that struggled to justify its existence, even with Meryl Streep added to the cast. But there have been plenty of others that seemed like they should be miniseries, even if they weren’t, like Killing Eve, The End of the F***ing World, and 13 Reasons Why, the last of which somehow lasted for four seasons despite resolving its story in the first. (Killing Eve also seems likely to have a Dexter-esque run, and perhaps ending, if only Villanelle can tolerate the look and feel of plaid flannel.) Even unscripted television isn’t immune from this more-is-less approach: Witness the frustrated disbelief among fans of HBO’s The Vow when they found out the docuseries, which already felt too leisurely in its pacing, had been renewed for a second year. We’re at the point where the premiere of every high-profile miniseries is greeted with “Will this get a second season?” news stories, and they don’t just feel like clickbait.

This is why I was hesitant to give The Flight Attendant a ringing endorsement in my review. Cuoco was a delight, not only expanding her established comedy range from Big Bang Theory, but demonstrating previously hidden dramatic chops. She was flanked by energetic supporting performances from Zosia Mamet, T.R. Knight, and Michelle Gomez, among others. And the show managed to keep its mystery, comedy, and character study elements in perfect balance. But it seemed entirely possible The Flight Attendant might eschew a complete and satisfying ending in hopes of leaving questions to be answered for a second season(*). Would it land the plane gracefully, or skip off the runway while looking ahead to more episodes?

(*) In certain TV obsessive circles, this is known as “pulling a The Killing,” though The Killing was never half as entertaining as this show.

In a pleasant surprise, the conclusion it reached expertly serves both masters. Cassie confronts both her personal demons and Alex’s killer, who turns out to be her latest lover/drinking buddy Buckley (Colin Woodell). She gets her first AA chip, and reconciles with estranged/exasperated best friend Annie (Zosia Mamet). Her fellow flight attendant Megan (Rosie Perez) turns fugitive after being caught stealing government secrets for the North Koreans, while Buckley’s rival assassin Miranda (Gomez) survives and runs off with the money that was responsible for the whole plot; but both of those situations feel more like ellipses than question marks. The show asked two big questions early on — “Who killed Alex?” and “Why is Cassie such a walking disaster?” — and it answered both, thoroughly and entertainingly. If there’s never any more, it’s a splendid, thoroughly self-contained experience.

And if HBO Max — which, you may have heard, is taking pretty desperate measures to make people aware of is existence — decides it wants more of its first homegrown original series with real buzz? Well, then the finale did a fine job of teasing that without interfering with the resolution of this first story. There’s potentially more to tell about both Miranda and Megan, and about Annie’s attempt to rebuild her life after lighting her law career on fire to help Cassie. More importantly, though, the last few minutes suggest an elegantly simple new status quo for an ongoing version of the show: Cassie’s co-worker Shane (Griffin Matthews) is revealed as a CIA agent who works international flights as a cover job, and whose boss is interested in recruiting Cassie as an intelligence asset. Cassie as a fumbling would-be spy is a simple, sustainable premise that wouldn’t require the series to change much of what worked this time around, but also wouldn’t unnecessarily prolong the original story, nor raise questions about why, say, Cassie’s boyfriends keep being murdered in exotic locales.

Not every miniseries (or should-be miniseries) is built to do this, and there’s also no guarantee that a second season of this one can maintain the same careful juggling act. (While Cassie’s sobriety will always be a challenge, for instance, she unpacked so much childhood trauma across these episodes that it might feel silly to give her equivalent flashbacks down the road.) But the sheer relief I felt that The Flight Attendant not only ended well, but plausibly set things in motion for future seasons, left me hoping that other series look at what happened here for guidance — and that some of them keep themselves grounded rather than foolishly taking off again into a climate they’re not suited to fly through.

Brantley Gilbert + Carly Pearce to Play Music City Grand Prix
Andie MacDowell on Learning to Love her Signature Curls
Witness to deadly Oslo shooting outside LGBTQ+ club: ‘There was a person shot in front of us’
Enter the Bizarre World of ‘Lorelei and The Laser Eyes’ Next Year on Switch and PC [Trailer]
Han Just Got Reunited With His Tokyo Drift Car While Fast X Films, And It’s Like No Time Has Passed At All